This story about dying and going to heaven is obviously not true, but that’s not the problem 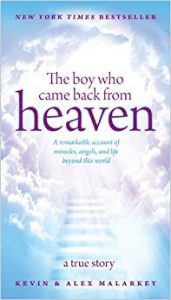 Way back in 2015, we wrote about the six-year-old kid who was in a horrific car accident, awoke from a coma two months later as a quadriplegic, and went on to publish with his father a New York Times bestseller called The Boy Who Came Back from Heaven: A Remarkable Account of Miracles, Angels, and Life Beyond This World, only to recant the story years later when he was a teenager. (Because we are “adults,” we also neglected to make a joke about the authors’ names being … Malarkey.)

What’s become apparent is that Alex Malarkey’s father, the now-deceased Kevin Malarkey, was primarily responsible for cooking up the story of Alex’s visit to the afterlife and single-handedly entering into an agreement with the book’s publisher, Tyndale House.

For the Washington Post, Kyle Swenson reports that Alex and his mother Beth Malarkey are now suing Tyndale to have Alex’s “name completely disassociated from the book and [seeking] a permanent injunction against Tyndale House requiring it do everything within reason to disassociate his name from the book.”

And Tyndale House, it seems, is withholding both the contract and royalty statements until Alex agrees that “the publishing agreement” (which he has not yet read) is “in effect and binding,” which means that the publisher has the right to continue publishing the book under the existing terms of the agreement.

Listen, this sucks for Alex, whose name is attached to a story he (allegedly at his father’s prodding) made up when he was six and his skull had recently become completely detached from his spinal cord, and who, according to Swenson, hasn’t received a dime of the book’s profits. I say bring on the lawyers.