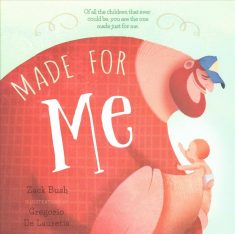 A Miami business owner is discovering the emotional and (cough) financial joys of publishing with the recent release of his debut children’s book Made for Me.

In yesterday’s Miami New Times, Christian Portilla profiles Zack Bush, owner of Ball & Chain, a popular bar in the city’s Little Havana neighborhood. Made for Me has already sold over 20,000 copies, and is one among surprisingly few books dedicated to the love of a father for his newborn child.

Bush says he wrote mostly while caring for his son late at night, and that, while his passion for documenting the many milestones fatherhood brought kept him going, there were some surprises, too:

“I knew that writing the book was going to be hard, but I didn’t know just how difficult it is. I also didn’t go into this thinking about the money I would make from it, because anyone who goes into writing or any of these creative industries knows it’s not always lucrative. After this process, I have so much more respect for people that chose this profession to pay their bills,”

The book was published last month by Familius, which describes itself as a “values-driven company” powered by a belief that “the family is the fundamental unit of society.” The response has been good so far — Bush will be returning to the legendary Miami-born indie Books & Books this weekend, after an earlier signing there ran short of books. He says he’s encouraged by the success, and will continue writing. His next book will be “about the role of a mom, or about being a dad to a little girl, inspired by the birth of his second child, Ava.”

“Just the other day, I was doing a reading at my son’s school, and I looked over at my wife, and she had tears in her eyes. I think that as the kids get older and we go through different stages, the themes of the books will change. But it will always be a sweet memory for us and the kids to look back as they grow and show them just how much they inspired me and how much they changed our lives.”