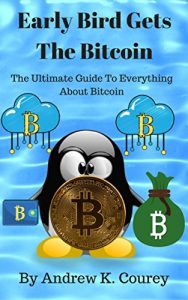 Last year, in pursuit of his goal to make twenty million dollars by the age of fourteen, Andrew Courey (who is currently eleven) began researching Bitcoin.

After devoting some serious hours to demystifying the booming cryptocurrency—which is finding all kinds of new uses—he decided that perhaps the ship had sailed. The investment had gotten a bit too rich for his eleven-year-old blood, or, in the less delicate phrasing of a recent New York Times article on cryptocurrencies: Everyone is Getting Hilariously Rich and You’re Not.

But, as Ari Levy reports for MSNBC, Courey’s diligent research did not go to waste. Instead he funneled his findings into a self-published e-book investment primer, The Early Bird Gets The Bitcoin: The Ultimate Guide To Everything About Bitcoin.

And frankly, Courey’s elevator pitch to Levy is a solid one:

“Anyone can learn about cryptocurrencies if they’re willing to spend 70 to 80 hours researching every source until they find a couple sources that make sense,” said Andrew, who lives with his parents and younger sister in Wellesley, Massachusetts. “The whole book, in the simplest terms, is very easy to read and simple to understand.”

The book is 57 pages and includes chapters on the history of bitcoin, bitcoin wallets, the cryptocurrency ethereum and initial coin offerings, or ICOs. The title has two meanings, with early bird serving as a reference both to kids, for whom the book is written, and the idea that the people who got into bitcoin early made fortunes.

While the life of an author will likely not build Courey the stately pleasure dome of a fourteen-year-old lifestyle he seeks, his book is posting respectable sales numbers (it’s ranked #999 at the moment of this writing) on his chosen platform, Amazon Kindle Direct.

Shoot, Andrew! I cannot curse the decisions of an enterprising child (who, by many metrics, is already a more successful person than I am today, or will ever be). But I can offer some hard-won-wisdom and say, “Stay away from that Amazon, young man. I know your friends are doing it, and I know it seems cool now…”

Courey discovered that side of the publishing business while researching other billionaires in Brad Stone’s The Everything Store: Jeff Bezos and the age of Amazon. But may I suggest some additional reading?

Bezos is not the hero of this business story, Andrew. You are!