“These statues are not history” — On Donald Trump, public art, and white supremacy So, ok. In the United States right now, there are more than a thousand public sculptures of Confederate leaders. Or, wait — let’s say it another way. In the United States right now, millions of people’s daily routines take them past public monuments to a movement that argued white people should own, and possess total power over, black people. They were so devoted to this ideal that they started a war to defend it, the bloodiest in our nation’s history. They lost.

And yet, somehow, monuments were built to them. As America belatedly begins the process of taking them down, a rising wave of hatred insists that they must remain. Our own Ladee Hubbard, author of The Talented Ribkins, wrote about this recently: “In the United States, when the myths and monuments of racial superiority are dismantled, vociferous backlash erupts, revealing a deep strain of white ethno-nationalism that is emboldened by the siren song of ‘America First’ bombast. Many here continue to believe that their problems have been brought on by the presence of racial ‘others.’”

Two days ago, an embattled President Trump made public statements in which he favorably compared the leaders of the Confederate treason to the founders of this country. Yesterday he took to Twitter to again proclaim he was “sad to see the history and culture of our great country being ripped apart with the removal of our beautiful statues and monuments,” adding that the “beauty” contributed by the metal likenesses of those who committed mass murder in defense of slavery will “never be able to be comparably replaced!”

Ain’t that our president all over? Donald Trump, art connoisseur. Donald Trump, sensitive lover of all beauty, who holds out a cocktail-weenie-sized finger as he traipses through a dewy meadow, in the hope that a butterfly may alight.

Or maybe not. If you’ve read The Making of Donald Trump, by Pulitzer Prize-winning journalist (and thirty-year Trump acquaintance) David Cay Johnston, you may remember this passage:

Before Donald Trump could erect Trump Tower—his signature building—on Fifth Avenue, he had to knock down the Bonwit Teller department store, which had catered to fashionable women since 1929.

Bonwit’s twelve-story façade was adorned with a pair of giant bas-relief panels considered priceless examples of the Art Deco era: two naked women with flowing scarves, dancers perhaps, cut in limestone. The building’s entry featured an immense grillwork made from Benedict nickel, hammered aluminum, and other materials, which gave it the impression of a lusciously large piece of jewelry when backlit at night. American Architect magazine’s 1929 appraisal of the building described it as “a sparkling jewel in keeping with the character of the store….”

There was no litigation over the destruction of the bas-relief façades and the valuable entryway grillwork, which Trump had promised to the Metropolitan Museum of Art. A spokesman for Trump who identified himself as John Baron told the New York Times that Trump had ordered their destruction. Baron said three appraisers told Trump that the Art Deco sculpture was “without artistic merit.” Museum curators, the building’s architect, and a host of architectural experts all said that was nonsense. 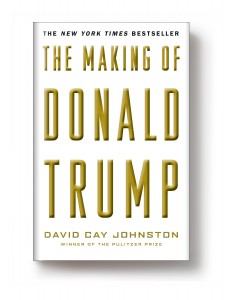 Baron said removing the art would have cost Trump more than a half million dollars in demolition delays, other unspecified expenses, and (without explanation) additional taxes. That last item may have struck those following the dispute as curious; by donating the art, Trump would have qualified for an income tax deduction. Of course, that deduction would have no value if Trump did not owe any income taxes in 1980, as public records show was the case in 1978 and 1979, and would be again in 1984, 1992, 1994, and likely every other year since 1978.

The entry grillwork that American Architect magazine had so highly praised a half-century earlier just vanished. Baron said the grillwork and the limestone panels, if preserved, could not have been sold for more than $9,000. Art experts dismissed that as nonsense as well. The Metropolitan Museum said its twentieth-century art curators never would have requested the donation of objects that lacked artistic merit or had no value in the market. The museum said one appraiser had estimated the value of the art in the hundreds of thousands of dollars. Others called the destroyed artifacts priceless, comparing them to the renowned artwork on the Rockefeller Center buildings.

Otto J. Teegan, who designed the grillwork in 1929, was still alive in 1980. Baron had said the grillwork just disappeared. Teegan wasn’t buying that. Teegan and others told the newspaper they were appalled. Teegan said the grille “would have required cranes and trucks to be removed and could not merely be mislaid or easily stolen. It’s not a thing you could slip in your coat and walk away with” since the heavy metal grillwork measured fteen by twenty-five feet.

Trump spoke up days later, saying safety concerns were his real worry, namely the fear of heavy limestone falling onto the sidewalk and street. “My biggest concern was the safety of the people on the street below,” he said. “If one of those stones had slipped, people could have been killed. To me, it would not have been worth that kind of risk.”

Noted art dealer Robert Miller, who watched the destruction of the limestone sculptures from his gallery across the street, described how huge pieces of stone did in fact crash to the Fifth Avenue sidewalk. “They were just jackhammered in half and pulled down in such a way that they just shattered… [I]t was just tragic. They were very much in the Art Deco style — very beautiful and very gracious.”

So… yeah. Yeah, this may not be about public beautification, maybe.

For the last word on the subject of Confederate monuments, let’s go to Mark Bray, author of Antifa: The Anti-Fascist Handbook, which we’re working hard to make available as soon as we possibly can (aka next week). Mark—who’s been pounding the pavement something fierce, struggling to ensure the tragic events in Charlottesville galvanize us into principled resistance—appeared on RT America this week to discuss the role confederate statues are playing in our intense political moment.  “What is our history, and how do we commemorate it?” Here, spend six minutes with this: