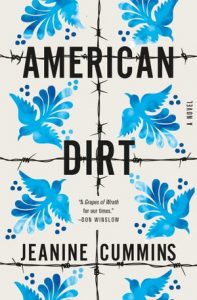 If you were even remotely tapped into the American publishing industry in 2019 you likely heard about Jeanine Cummins’s novel American Dirt. Positioned by publisher Flatiron Books as the book of 2020, the novel appeared on a multitude of most anticipated books lists, was all over bookstagram, and received glowing praise from booksellers and reviewers alike. Now that the book is in the world, the conversation over the past week has shifted, and in this shift is the bubbling over of several longstanding issues in the industry itself.

First off is the question of fiction and who gets to write which stories. American Dirt has garnered a lot of criticism from #ownvoices circles as to Cummins’s right to write the story of Mexican migrants. She presents as white and in a 2015 essay identified as such. Cummins has consistently defended her process stating that she conducted five years of research, including traveling to the border and interviewing migrants and the people who work with them. Which is good. If you are going to write a point of view that isn’t yours (and you have spent a long time thinking about why you want to write from that point of view), you should do research and talk to people who live the experience you are portraying.

At a Q&A at Winter Institute yesterday, Publishers Weekly quoted Cummins as responding that she has “lived in fear for this moment, being called to account,” while also citing the numerous booksellers and Latinx authors who have praised the book. This to me seems like a strange fear to have if you believe you have truly done enough to “earn” the right to tell this story, but I’m not a novelist. This aspect of the controversy is really nothing new, but when taken in conjunction with critiques of the novel’s content itself it becomes a pretty relevant issue.

The book has been described as rife with Mexican stereotypes, bewildering choices by the characters, and questionable metaphors. In her December 12 review published on Tropics of Meta, Myriam Gurba writes of the book’s protagonist: “Despite being an intellectually engaged woman, and the wife of a reporter whose beat is narcotrafficking, Lydia experiences shock after shock when confronted with the realities of México, realities that would not shock a Mexican.” She goes on to argue that the book essentially boils down to the argument that murder and corruption are Mexican problems that will be solved once Lydia and her son reach the United States.

Other reviewers have pointed out that the text is peppered with Spanish words dropped in and italicized to remind us that the characters are indeed Mexican, but not in a way that any native speaker would use them. The New York Times review points out the repeated descriptions of the characters as various shades of brown, including the confusing “tan as childhood.” Discussions of the stereotypes in American Dirt led to writer John Paul Brammer starting the meme “writing my Latino novel” on Twitter.

The American Dirt controversy starts to beg the question how this book got so much unilaterally positive praise so early on. And that is largely the result of a publicity machine that continues to move forward and tell us the book is great. In the midst of this controversy, Oprah and Barnes & Noble named American Dirt their respective book clubs’ pick and numerous Latinx celebrities have posted eerily similar photos to Twitter praising it. The fact that this book which may have had the best of intentions but failed at execution still garnered a seven-figure deal and breathless praise speaks to larger issues of access in publishing. Cummins was paid a ton to write her version of a story that numerous Latinx writers have written, and she has pointed out that “I’m not going to turn down money someone wants to pay me for a book that took me seven years to write.” And I think that’s a fair statement. However, the authors who have actually lived these experiences—and authors of color more generally—are often told that their manuscript doesn’t have broad appeal and are more likely to be published by an indie that can’t provide a huge deal or match the publicity machine of a big five. The inequity of access to this industry is a huge issue that publishing needs to reckon with in a real way across all facets.

People have pointed to the content of American Dirt as proof that there need to be more people of color in publishing, and this is true, but it also isn’t enough to just have someone in the room. You also have to pay entry-level employees better and provide support for those (probably few) employees of color in largely white spaces so that they stay. You have to support book bloggers and booksellers of color with the same gusto you support white ones. And you also have to listen to them. Cummins interviewed migrants and read Mexican authors, but it feels like perhaps she didn’t really listen to what they were saying before writing her novel.

There is a lot to unpack in the controversy surrounding American Dirt, and here’s hoping this serves as a bit of a come to Jesus moment for an industry that has been dancing around a lot of issues regarding diversity and representation for a long time.

Business of publishingControversydiversity in publishing