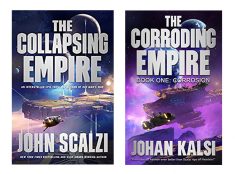 Last Tuesday, Tor Books released The Collapsing Empire, the latest novel from sci-fi juggernaut John Scalzi. The previous day, a mysterious doppelganger writing under the name Johan Kalsi released The Corroding Empire on Amazon, with a cover that was unmistakably similar to Scalzi’s. According to Beth Elderkin, writing for i09, Amazon temporarily removed The Corroding Empire from sale (for reasons that are unclear), but ultimately reinstated it. At present the book is available under the title Corrosion, though the cover remains the same.

Wooo boy! Looks like we’ve got a little literary hijinks on our hands.

So what is The Corroded Empire? And who is Johan Kalsi? According to the Amazon page, “Johan Kalsi is Finland’s hottest science fiction author. An accomplished geneticist as well as a 6’3” ex-Finnish Marine, in CORROSION, Kalsi shows himself to be more Asimovian than Asimov himself. CORROSION marks his English-language debut.”

Sounds like that dastardly dog Mr. Theodore Beale is at it again! Yes, the longtime Scalzi nemesis, and Rabid Puppies founder, has assumed yet another alias and set about trolling the sci-fi superstar in a confusing and ultimately clumsy attempt to derail the launch of  The Collapsing Empire. Beale, who goes hy numerous pseudonyms but is probably best known as Vox Day, is notorious in the sci-fi world for his hostility to writers who approach the genre with a concern for social justice, and in particular for an incident in which he called Hugo winner NK Jemisin an “ignorant half-savage.”

Scalzi and Beale have been feuding for more than a decade, ever since Scalzi publicly responded to an article Beale wrote under the title “Why Women Can’t Think,” in which he blamed the prevalence of women’s studies courses, among other factors, for the paucity of women writers in sci-fi. Scalzi fired back, Beale took the bait, and a war of words ensued, to which Scalzi responded by pledging to donate five dollars to charity every time Beale mentioned him online, and encouraging others to do the same.

Elderkin reports that if you search Amazon for “Johan Kalsi” (but don’t try this at home), two books come up. The first is The Corroded Empire by Johan Kalsi, which is rated at 3.5 stars in 113 reviews. The second is The Collapsing Empire by John Scalzi, rated 4 stars in 63 reviews.

Vidal vs. Mailer; Ellis  vs. Wallace; Rushdie vs. Everybody; these ego-driven feuds form a proud tradition of overblown, literary bro-battles. While unlikely to enter this august hall of  fame, the most recent spat between Beale and Scalzi makes up of for its lack of gravity with an endearing, chuckle-inducing pettiness.