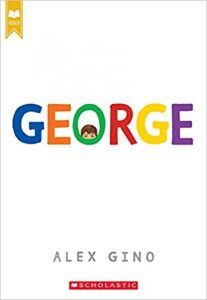 Hermiston, Oregon is a town of just over 17,000 residents, tucked beneath the Columbia River on the eastern side of the state.

Once a year you can find brainiacs from the city’s five elementary schools duking it out in the state’s Battle of the Books event. But this year, the principals of those schools have elected to abstain from competition — all because of a character named Melissa.

As Jayati Ramakrishnan reports for the East Oregonian:

The elementary school principals sent a letter to parents stating that the novel George, by Alex Gino, was not appropriate for their third- through fifth-grade students, based on their adopted human growth and development curriculum.

The book, which is not described in the letter sent home to parents, is about a child who is born male and known to all as George, but identifies as female and prefers the name Melissa. The book details how Melissa comes out to her best friend, and eventually to others, through the help of a school play.

It’s not the first time George —which has won both a Stonewall Book Award and a Lambda Literary Award—has caused consternation in schools. The reason for pulling the kids from the competition, reluctant administrators say, has to do with the fact that George does not line up with what the students are learning about human growth and development, not any desire to politicize an elementary school reading comprehension competition.

The trouble with this line of reasoning is that many people’s bodies and experiences don’t actually line up with what is taught in human growth and development. A second hang-up might be a misunderstanding of the point of literature, which (at any reading level) is meant to expand what our own myopic view on the world offers us, a view that various school curricula seem doomed to replicate.

The Hermiston elementary geniuses will still compete in a modified tournament at the district level, and will have to pin their hopes for a state title on their middle- and high-school counterparts.