The Story Prize announces its nominees

Author Steven Barthelme has been nominated for the Story Prize, which is welcome news to us here at Melville House.

The Story Prize is an annual award for short story collections written in English and published in the United States. And, of course, Barthelme being the short story savant that he is, his collection Hush Hush is in the running. 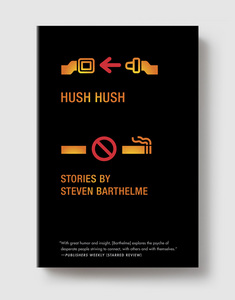 The Story Prize’s blog is currently publishing a series of posts from nominees. The entirety of Barthelme’s entry is below …

I became a writer in about 1989 but that only lasted for a brief period, a few years, until I wasn’t anymore. At first, when I was 17 and on through about 30, I would not call myself a writer because it seemed something too fine and too accomplished, something wonderful that I aspired to but didn’t qualify for. Actually it was longer than that, it wasn’t 30, I felt the same way even after publishing a book of short stories, getting a job as a professor of English teaching creative writing. The only time I ever felt that I was a writer was a brief period of a year or two, when I was about 42, after a fancy literary agent got me a contract at Random House to publish a novel and a second collection as well as to reprint the first collection in Vintage Contemporaries. I probably felt that I could stop holding my breath then. None of that ever happened, of course. I wrote the novel, which wasn’t much good, and Random politely declined to publish it; the other commitments were contingent, and so evaporated. I went back to my previous sense of things, in which, truth be told, I was more comfortable, as a person who aspired. Someday I would succeed, at writing something good, and at publishing as well.

For many years now, when people at a doctor’s office, or in the casino at a blackjack table, ask what I do, I tell them I teach school. It is, after all, how I pay the freight. The people at the university have the good grace not to ask if I’m qualified to teach what I teach, as any professor knows that almost none of us are, in God’s eyes. But my understanding about writing stories has deepened only very recently, and it’s only now that I grasp the thing better. I’m not a writer. I’m some English teacher, a guy who is fond of television and mows the lawn, likes steaks and cars and cats, sleeps badly, who sometimes plays the instrument, likes words, likes sentences, likes typing.

Of many things I wish I had written, one thing for which I hold a fixed awe and a fierce envy, and which is also germane here, is a preface James M. Cain wrote to one of his novels [The Butterfly]. The preface ends with these more or less flawless sentences: “Yes, I have actually mined coal, and distilled liquor, as well as seen a girl in a pink dress, and seen her take it off. I am 54 years old, weigh 220 pounds, and look like the chief dispatcher of a long-distance hauling concern. I am a registered Democrat. I drink.

Want more? Here’s a story from Hush Hush called “Heaven” that we published earlier this fall on MobyLives, and another, titled “In the Rain,” that ran on Electric Literature’s Recommended Reading.

Also: don’t forget the Hush Hush mixtape … because how many other Story Prize nominees have mixtapes?