The Story of Ferdinand is coming to the silver screen 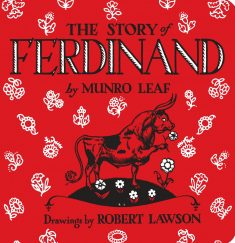 As they say of old children’s books: they either go out of print early enough to live on as beloved hand-me-downs, or they stay in print long enough to see themselves turned into animated films starring famous wrestlers.

This Friday, the children’s classic The Story of Ferdinand will open in theaters and achieve canonicity in the latter category. This screen adaptation, simply called Ferdinand, stars actor and wrestler John Cena as the eponymous bull who simply does not want to fight. A film, then, for Cena-philes. (Sorry.)

A collaboration between author Munro Leaf and illustrator Robert Lawson, The Story of Ferdinand was greeted warmly on its original publication in 1936. Disney even produced a cartoon adaptation just two years later in 1938.

But as Michael Patrick Hearn reports for the Washington Post, it’s been a long and winding road from the book’s immediate bestseller status to its impending Hollywood premier. He writes:

The timing of the book’s publication—just months after the start of the Spanish Civil War—proved a boon to sales as both sides excoriated it, while Hitler called it “degenerate democratic propaganda.” Others, including the Roosevelts, were fans of the book, while Anne Carroll Moore, the founder of the New York Public Library’s children’s division, called it an “effortless, happy collaboration… designed for sheer entertainment of the ageless.” John Cena is no stranger to the ring. Via WikiMedia Commons.

The thinking of Twentieth Century Fox seems to be that the story’s message, about remaining true to yourself regardless of mounting social pressure, might speak to our own divisive moment — or so suggests the tagline: “Built to fight, born to love.”

Cena himself has hinted (really, truly, hinted) that celebrities of his status should put forth a discernible political message. It’s a nice thought, certainly, in regard to Fredinand — a tale about the transcendent joys of peaceful resistance. It’s also a strange and frightening thought when it has people looking forward to possible presidential bids from Cena and his colleague in the ring, Dwayne “The Rock” Johnson.