The story behind The Greek Connection 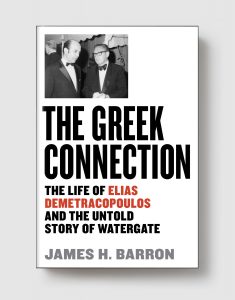 The making of The Greek Connection began in a suburban Boston emergency room in 2007. I’d been rushed there by ambulance and doctors and nurses were struggling to control my symptoms. I was sure this was my end. To quell my fear, I sought a place of calm, far from the commotion around me. So I pictured myself on an idyllic summer morning in 1966 at a small taverna on the island of Mykonos, drinking tea, eating figs, freshly baked bread and honey, listening to the bells of donkeys ambling down the hillside and feeling the warmth of the Greek sun on my back. The ER stabilized and discharged me, after discovering it was a terrible reaction to a medication.

For months afterward, I tried to understand why at that perilous time my mind took me there. I had fallen in love with Greece when I spent much of my post-college graduation summer there and met people who introduced me to the complexities of Greek politics. I was fascinated by stories about the mysterious Tom Pappas, the Greek-American tycoon, later described as the bagman for an illegal transfer of foreign funds to the 1968 Nixon campaign and identified on the Watergate tapes as “the Greek bearing gifts.”

When I wasn’t working, I toyed at writing a novel set in Greece and embarked on hours of background research. My brother, a successful writer/producer in Hollywood and with the BBC, encouraged me to learn plotting by reading mysteries set in foreign locations. I even tracked down a girlfriend from that time, now a psychotherapist in Geneva. She was game to help me fictionalize our experiences, including stories I had learned about Pappas, for whom her father had worked.

It didn’t take me long to figure out I am much more comfortable writing non-fiction. So, I set about preparing a serious article on Pappas. Serendipitously, in mid-2009, at dinner following a fundraiser for the New England Center for Investigative Reporting, of which I am a founding board member, I told our guest speaker, legendary investigative reporter Sy Hersh, about my project. He recommended that I focus instead on Greek journalist Elias Demetracopoulos, the person who had tried unsuccessfully to expose the Pappas money-laundering plot. I flew to Washington to meet Elias and quickly realized that this Watergate-related bombshell was but a small part of his larger, even more compelling life story.

In 1941, as a precocious 12-year-old in occupied Athens, Elias became a resistance fighter, later captured by the Nazis, tortured, and imprisoned. His life was miraculously spared by moving him to a horrible mental hospital for the last year of World War II. He survived and during the Greek Civil War was shot while trying to save relatives who’d been kidnapped by the Communists.

Later, while recovering from near fatal  tuberculosis incubated during his incarceration, he became engrossed in the career and assassination of intrepid CBS correspondent George Polk. Elias became a fiercely independent, celebrated and enigmatic, scoop-hungry journalist, covering primarily American affairs in Greece. Gaining access to powerful figures inside and outside both governments, he  attracted many enemies by exposing truths others wanted hidden.

After the Greek military dictatorship seized power in 1967, Elias narrowly escaped to Washington where for seven years he led the fight to restore democracy in his homeland, challenging both Democratic and Republican Administrations. The CIA, FBI, and State Department relentlessly spied on and harassed him, trying to destroy his reputation and effectiveness. The Greek government repeatedly sought to kidnap and kill him. Unbroken, he resolutely stood up for himself, his country, and his sense of honor. I strongly believed his full biography should be told.

Elias Demetracopoulos was a difficult subject. Several others had started to write his story but given up. He didn’t warm to my idea until he’d talked with me face-to-face over several months of interviews. I explained that I would be writing a biography not a hagiography. While I sought his cooperation, it would not be an “as-told-to” book. I would do independent research and he would have no editorial control over any of the manuscript. He agreed, but stubbornly tried to control my narrative.

While preparing my book proposal, Elias recommended I call an editor at Melville House in New York, who had urged him to write his autobiography, which Elias said he was too old to do. What I didn’t know was that the year before, Melville House publisher Dennis Johnson, an aficionado of Watergate theories, had reached out to author Christopher Hitchens to discuss an essay he’d written called “Watergate—The Greek Connection.” Hitchens  told Johnson he’d be glad to discuss it, but would only be  quoting his primary source, Greek journalist Elias Demetracopoulos, one of his “heroes, a man who had lived an amazing life.” He urged  Johnson to speak with him “while he’s still around.”  The editor offered me a contract to write a small book focusing narrowly on the 1968 “October Surprise” that never happened, the unknown roots of Watergate.

Elias gave me full power under the Freedom of Information and Privacy Acts to access his American government files. He provided reams of articles and documents concerning better-known aspects of his career but opened up only slowly about his multifaceted personal life. He steadfastly resisted divulging the names of sources to whom he had pledged confidentiality, even long after the sources had died.

A breakthrough occurred in June 2012 after I travelled to Athens to research Elias’s pre-1967 life. When I told Elias I’d learned stories about his childhood, World War II experiences, his personal relationships, especially with women, and his years as a controversial journalist, he asked where I got my information. We both smiled when I said that I wouldn’t disclose my sources. I told him I didn’t have to include everything I learned, but whatever I used must be as accurate as possible. Afterwards we often engaged in a game in which, rather than request his sources, I asked if I would be wrong if I named someone particular.

For more than five years I visited him frequently and talked with him by phone, often daily, as I tried to peel back the layers of his story, getting him to confirm or disconfirm information I’d discovered elsewhere, and reveal more of himself. Eventually he gave me access to thousands of personal files, shared once-hidden stories, and permitted friends who held his confidences to speak openly with me. At our last meeting, he hugged me, tears running down his cheeks, telling me I was the little brother he never had.

Most books that deal with this period have been written from either a Greek or American perspective with a definite political view. I researched all sides, conducted hundreds of interviews, explored archives on two continents and also sought to use  English, German, French, Russian, Polish, Italian and Australian materials.

After Elias’s death in 2016, I worked on the book full-time and submitted in late 2017 an 850 page manuscript.  Since the time of my original contract, the average length of a non-fiction best seller had dropped from 467 pages to 273. For nearly two years I painstakingly restructured and revised the book, turning 42 chapters into 29. Cherished passages, detailed descriptions and profiles, countless endnotes and bibliographic references were deleted. Faulkner was right.

The book will be published on July 28, 2020. After the long odyssey, enthusiastic praise from early reviewers Doris Kearns Goodwin, Sy Hersh, Mitchell Zuckoff and Stephen Kinzer, is most gratifying.

As Dennis Johnson observed: “This is one of those books that started out—a long time ago—as something else, something smaller. In the end, Barron presents us with an epic saga of an impactful life—a stunningly  cinematic rendering of audacious courage, relentless battles and determined survival.”