Let Me Be Like Water by our very own British author, S.K. Perry, is a beautifully moving, poignant, and lyrical debut novel set in Brighton, a seaside town in England. The coast and the sea are themselves characters in the book, adding depth and feeling and framing our protagonist Holly’s emotional journey as she tries to piece her life back together after the death of her boyfriend.

‘We have a week of cold blue skies. The starlings swirl over the old pier. They shake in the sky: tiny wings moving fast to keep them up. I don’t know where they’re going. They don’t seem to want to leave. We watch each other moving, travelling nowhere. The sea curls, throws itself at the rocks. I go for long runs. My muscles shake and I try to be still.’ – from Let Me Be Like Water

Which is why it seems such a perfect fit for the Royal Society of Literature (RSL) Ondaatje Prize—and why its longlisting, announced on Wednesday 27th March, is a joy. The annual award recognises distinguished works of fiction, non-fiction, or poetry, that evoke the spirit of a place. The prize’s scope is vast, which has allowed for a wonderful range of authors to win in the past. Last year, poetry took home the prize for the first time ever, with Pascale Petit winning with her collection Mama Amazonica, published by Bloodaxe. Other winners have included Golden Hill by Francis Spufford (Faber), The Hare With Amber Eyes by Edmund de Waal  (Vintage), and In the Country of Men by Hisham Matar (Viking).

The RSL Ondaatje Prize is in its fifteenth year and doesn’t usually announce a longlist, but to celebrate the array of stunning literature out there, on this anniversary an exception has been made. The prize itself also has a longer history in a different form: from 1967 until 2003 a prize called the Winifred Holtby Memorial existed, named after the English novelist and journalist best known for her novel South Riding. It celebrated the best regional novel of the year. Keeping that spirit of place, it has been superseded by the Ondaatje prize, whose benefactor is businessman and philanthropist Christopher Ondaatje, brother to famous author Michael.

The judges this year are poet and playwright Sabrina Mahfouz, novelist Michèle Roberts, and writer Ian Thomson, all Fellows of the Royal Society of Literature. The selected longlist is diverse, and includes well-know names including Jonathan Coe and Sarah Moss, as well as authors from small independents including Emmanuel Iduma from Cassava Republic and Gaia Holmes from Comma Poetry. Out of the twenty books longlisted (as below), eight are from big publishers, six from large independents and six from small independents (where we humbly place ourselves). That is a very healthy split and we’re delighted to see so many indies being celebrated here.

However, it is worth noting that of the 15 previous winners, 10 were published by huge, conglomerate publishers, with Faber & Faber winning three times and Canongate once. The only true, small indie that has won is Bloodaxe. Not to put down the wonderful work of the winning authors and their publishers, congratulations to them, but it would be nice to see the tide turn and for more small independents to be getting recognition—winning recognition. 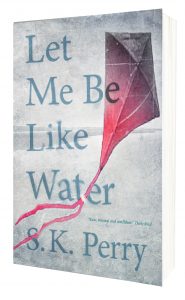 The shortlist will be announced at the British Library in London on 16thApril, to which past winners will be invited to celebrate the prize’s fifteenth year. The overall winner will be awarded £10,000 on 13th May.

Please keep your fingers crossed for S.K. Perry, whose fans include authors Nina George, Sophie Mackintosh and Fiona Mozley. Let Me Be Like Water is out now, with a new paperback edition coming out on 4thApril in the UK.