Trump doesn’t enjoy a free press that questions rather than bows to him. Maybe you’ve noticed?

You may have heard that Donald Trump had a press conference last week? It was his first since becoming president-elect, and it was, well, unconventional. As Jim Rutenberg describes it at the New York Times:

Well, that sure escalated quickly.

“That” was Donald J. Trump’s inaugural news conference as a duly elected United States president-to-be, in which he called BuzzFeed a “failing pile of garbage,” dismissed CNN as “fake news” and more or less told the whole lot of reporters at Trump Tower to stuff it when it comes to his unreleased tax returns because everyday Americans don’t care and, anyway, “I won.”

One of the most shocking moments in the conference, referenced by Rutenberg above, was Trump’s refusal to answer a question from CNN’s Jim Acosta, berating him with the subtlety of a toddler in meltdown mode, while the other journalists in the room watched.

When CNN’s Senior White House Correspondent Jim Acosta attempted to ask Trump a question (“Since you’re attacking our news organization, can you give us a chance to ask a question?”) and the president-elect categorically refused, responding: “I’m not going to give you a question. You’re fake news.” Acosta responded: “Mr. President-elect, that is not appropriate.”

Shutting down the press in this way is a scary harbinger of things to come (even if, surprise, Rudy Giuliani and Newt Gingrich don’t see it that way). So what is the press to do in the face of unveiled hostility? Pete Vernon at the Columbia Journalism Review believes that the media itself is the only thing “standing in the way of… Trump’s singling out certain organizations” as illegitimate.

Journalism, he writes “is a competitive business, but it’s not a zero-sum game.”

We all campaign for scoops, access, and sources, but we are, effectively, on the same side. If Trump ignores or blacklists outlets he deems hostile, and others in the industry don’t defend them, the public loses out on the perspective those reporters bring, and we as an industry lose out in our efforts to hold power accountable.

Arguing for the return of the journalist as malcontent, he sees the press conference as a missed opportunity.

In the hothouse of a packed Trump Tower lobby, with dozens of reporters trying to get their questions in, it’s understandable that no one stopped to consider the implication of Trump’s actions. But watching on television, I wished those journalists in attendance had picked up Acosta’s line of questioning, or even refused to continue asking questions, until the President-elect acknowledged the organization he had earlier attacked.

I hardly think that Trump is the media savant that he gets credit for, and I tend to agree with Jay Rosen of NYU, who tweeted that “Trump is no wizard of modern media. He just lacks a sense of shame.” 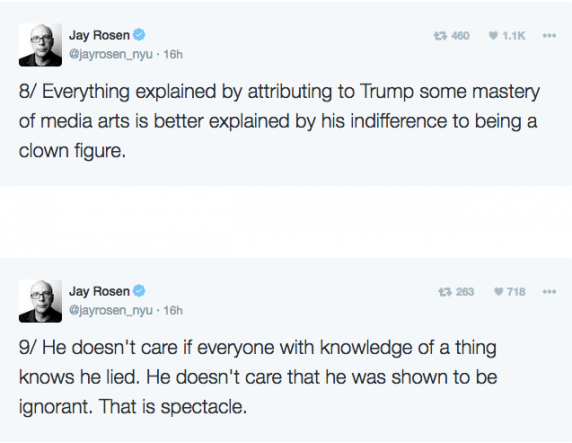 But that lack of shame still requires a response, and the country still requires a free press to dig into, report on, hold to account, and stand up to its newly elected bullies. As Vernon writes, “With just over a week until he assumes power, the press needs to be ready to work together to ensure that reporters are provided the access and information necessary to accurately and honestly cover the new administration.”

Next Friday, the new administration begins. As a candidate, and now as the President-elect, Trump and his team have shown a willingness to retaliate, bully, and ban journalists whose questions he doesn’t want to answer. As an industry, we must be prepared for more moments like today’s, and we must be ready to respond accordingly.