The Power of Positive Cussing 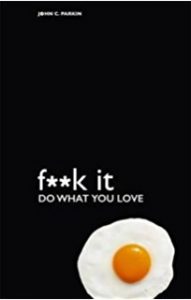 What Color Is Your Parachute? these are not. Browse the self-help aisle at your local independent Amazon bookstore, and you’ll see a new wave of self-help books, aimed at a more contemporary, perhaps sailor-ish demographic. That’s right, assholes: I’m talking about profanity-laced wordpaths to self-betterment.

Think this isn’t a thing? Oh, it’s a thing. It’s very much a thing. Below are just some of these newly popular fucking things:

So why is there suddenly this wave of self-help books with aggressive titles? Call it a rebranding of the genre, to fit with the times. For decades, the self-help industry (worth $10 billion a year, let’s add) has been built on positive affirmations, list-making, and pushing the reader to be their best self. But Trump is president, climate change deniers are columnists for the New York Times (and heading up the EPA), and if we’ve proven to ourselves that we can’t have nice things, what’s the goddamn point of improving ourselves?

This is where the “power of pessimistic thinking,” as John Warner writes in the Chicago Tribune, comes into play. Rather than teaching readers to control their feelings, this new crop of books wants us to embrace our imperfections, partially by accepting that we’re all doomed regardless; Henry Alford called this “anti-self-help” in the New York Times back in March. And though many will think, as Alford writes, that “reading a book that coaches you on how to reject self-help is like downing a shot of Patrón to get the nerve to stop drinking,” these books are making waves with their refreshingly defeatist, pseudo-existential advice. Everyone’s life sucks. You’re no different. Welcome to the fucking misery of shared human experience.

The “help” within the books is just as crazy as the titles themselves — which is to say, strangely refreshing. In Stand Firm by Svend Brinkmann (not as sweary but definitely as defeatist), the advice is downright jarring. Fire your therapist. Think of progress as destructive (and a relatively new concept born of modern selfishness). Focus on the negative. Stop being so damn introspective. Read a novel (this last one, we agree with, and hey, did you hear about the great reviews the aptly depressing First Love is getting?).

You’re thinking, that’s all well and good, but why the holy goddamn are these assholes swearing so much? Probably to differentiate themselves from the old guard of self-help as crisply as possible. Nothing says anti- better than a few f-bombs (or, in the case of Sarah Knight’s The Life-Changing Magic of Not Giving a Fuck, 732 f-bombs). And the linguistic free rein is actually a pretty apt metaphor for the no-fucks-given mentality these books espouse. Knight told the Australian online magazine Whimn that she thinks her books have been “very liberating” for readers, and that the “the profanity is essential to that feeling of liberation.”

But these writers (and the savvy publishers grabbing up their books) are also picking up on the increased acceptance—and benefit!—of having a truly terrible pottymouth. Several years ago, Scientific American published a study claiming that swearing not only emotionally but physically alleviates pain; last year, Marist College posted the results of a study that found people who curse are more intelligent than people who don’t.  The crossover of comedians into self-help (Tina Fey’s Bossypants, Amy Poehler’s Yes Please, etc.) is having the double effect of bringing non-traditional readers into the demographic as well as normalizing the, ahem, freer tone previously reserved for the humor aisle.

The upshot is a shift from touchy-feely to earnest and self-deprecating, and the trend is becoming so popular that even mental health advocates are taking part. Michael I. Bennett, who co-wrote Fuck Feelings and Fuck Love with his daughter, is a practicing psychiatrist. And while the Bad Word in the Title is obviously a gimmick, does that really make it such a bad thing? Because you have to admit: there’s something satisfying in knowing we’re all irredeemably flawed, that there’s no magic elixir, no clear map to finding nirvana. And if that’s replacing relationship advice from a misogynist or health advice from a snake-oil salesman… maybe that shit isn’t as fucked up as it first seems.

Vintage blog fashions! Seeing pink: is it just us, or do all these popular feminist books look the same?

Today in “well... shit”: Say goodbye (again) to the Bronx’s only Barnes & Noble