A map of the US by statehouse majority. (Nebraska’s state legislature, the nation’s smallest, is unicameral and non-partisan.)

Much has been said in the liberal media about Republican gerrymandering of congressional districts. What has not been said, at least not as loudly, is that the Democratic Party does the same thing (if not as egregiously (North Carolina), and if not in combination with race-based voter suppression (North Carolina)). This bi-partisan program in the ruination of what remains of American democracy has contributed to the following solemn reality: only thirty-three out of 435 House races were competitive in the 2016 elections. In other words, in only about thirty-three of 435 races were voters presented with a contest that was not, as the tennis world says, a “walkover.”

Needless to say, most of this is the “natural” consequence of the disproportionate presence of one party over the other in a given state. For example, in New York in 2012 Democrats received sixty-six percent of the popular House vote, but they won twenty-one out of twenty-seven House seats, or three more than was “fair.” New York’s districts are not gerrymandered, but the real-world effect is the same as if they were: an unjust share of seats relative to population.

Tyranny of the majority anyone?

But even with real gerrymandering—the drawing of political boundaries to give the governing party an advantage that it doesn’t enjoy through votes won—the Democrats are far from innocent, as district maps in Maryland and Illinois testify. (Though it’s true Democrats have created fewer districts with shapes resembling Goofy sodomizing Donald Duck.) So, shouldn’t the question be not “why are Republicans allowed to gerrymander,” as liberal outrage likes to conceive it, but “why is Republican gerrymandering more effective than Democratic gerrymandering”? The obvious answer to that question is, “Because the Republicans control more state legislatures and governorships.” But shouldn’t the next question then be, “Why do they control more state legislatures and governorships”? And isn’t the answer to that “Because there are more rural states than urban, more poor states than rich, more socially regressive states than progressive, and more ill-educated states than well-”?

And doesn’t that mean that, gerrymandering aside, the current division of party representation in Congress is basically reflective of the democratic will under the federal electoral system as it has existed for most of the last two hundred years? Liberal dissatisfaction with the Electoral College is a dissatisfaction with history. There is nothing wise about the Electoral College, just as there is nothing wise about the fact that Rhode Island and North Dakota get as many senators as California and Texas, but the fact is that under our system states matter, even little states, even states where there are more cows than people, and even states where prevailing attitudes toward race, gender, class, guns, and climate are more or less despicable (I give you the poster-child of political despicability, Texas). A current map of US Congressional districts, shaded to show party preference according to the Cook Partisan Voting Index, unveiled twenty years ago this month.

Frankly, I think that most of the heat generated among liberals by the idea of Republican gerrymandering misses a larger point. The largest reason for our unhappiness with the mathematics of political representation has ever less to do with devious Republican advancements in the fine art of gerrymandering and more to do with the fact that the Democratic Party, and certainly Democratic Socialists, have in essence gerrymandered themselves by fleeing Red states in vast numbers, for reasons that are a sublime mixture of economics, culture, and raw political inclination. In other words, as the Prosperous, Educated, and Progressive people of the coasts (the PEPpy Peeps of Bi-Coastal Privilege) vote with their feet, they are unwittingly but energetically conspiring in their own defeat. PEPpy peeps (among whom I must count myself, awkwardly) have systematically sequestered themselves in various well-known enclaves of the Creative Economy/Information Economy/Tech Sector, as you like it, with San Francisco and Seattle at the top of the list. Seattle has a population growth rate over three percent and can’t build ugly square condos fast enough to warehouse it all, while Illinois is losing close to 40,000 residents annually. (Full disclosure — or Irony Alert, I’m not sure which: I moved from central Illinois to the Seattle area in 2016.)

Unfortunately, lost in our haughty disdain for whatever the heck people in Ohio do all day, we PEPs seem to have forgotten how, exactly, federal elections work… until one day we raised our eyes in horror from Buzzfeed to the terrifying news that we had a president with orange hair. We then queried Alexa, sitting vigilant across the room on the polished granite kitchen counter, and asked, “Hey, Alexa, tell me, WTF?”

Alexa replied, “OMG GOP WTF?” (You know things are bad when Alexa starts answering a question with a question.)

The only numbers needed to understand my somewhat cartoonish version of the current political moment are 4.5 million (the number of votes by which Hillary won California) and 3 million (the number of votes by which Hillary won the popular vote nationally). There is no real need to get wonkier than that. We done gerrymandered ourselves, folks. Actually, we’ve perverted gerrymandering, turned it into a blood sport: we created a political boundary (the West Coast, or Cascadia as we Cascadians say) in order to give a numerical advantage to the opposing party. We ensured winning in a few states—the smart states, the rich states, the toffee-nosed states, as we think—by an enormous margin, while making it possible, by narrow margins, for Donald Trump to win the presidency and the Republican Party to win the Senate (and by extension the Supreme Court). With only one Republican Senate seat in question in the next cycle, the future looks pretty Red.

The consequences of this movement of feet, populations, and votes are bad. They’re bad because they mean that national politics will continue to be regressive — a democracy of, for, and by money. The worst of these consequences is that there will be no national political means for addressing the primary fact of political economy in the present: the making miserable through poverty and insecurity of more than half of the people living on our chunk of the North American continent.

I won’t rehearse the numbers here, they’re familiar enough. Stunningly low workforce participation, homelessness, the working poor, childhood poverty, loss of meaningful employment to machines and big data, and a generalized and ever-enlarging sense of living in “precarity” among those who for the moment have escaped the direst forms poverty takes in this country. Add to this the social ills that follow from such an economic reality: debt, drug addiction, lack of access to education and healthcare. 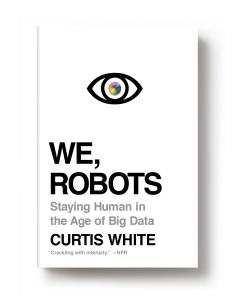 But what creates these numbers and all of these ills is this: we are characters in a damned-if-we-do-damned-if-we-don’t tragedy, and all the tragic flaws are systemic, not personal. We are caught between two imponderable forces, like Ulysses between Scylla and Charybdis (Aeolic Greek for “a rock and a hard place”). On one side we have the “progressive” forces of the high-tech economy eliminating ever more of the jobs that used to support middle-class families. (Because of Uber and Lyft, the value of a New York taxi medallion has dropped by more than three-quarters.) Now, it might be that the forces running the economy could be willing to do something for the people that they harm, maybe. Technocratic elites like Obama/Clinton are open to various kinds of wealth redistribution, including “guaranteed minimum income” programs. But the willingness to help those they’ve hurt is not serious, a mere “nice thought,” because on the other side we have the entrenched forces of accumulated wealth and free market ideology unwilling to do anything for anybody anywhere — and they are running the government. (Mitch McConnell wants to gut Medicaid while representing the most Medicaid-dependent state in the union, Kentucky. Let that factoid sink in.)

If this grim account seems something less than helpful, I would counter by saying that, if we’re fucked, it’s useful to know that robust fact, and useful to know why. If there is to be real resistance, something beyond a resistance driven by ratings numbers at MSNBC or new paid subscriptions at the New York Times, we must first participate in Marx’s “ruthless critique of everything existing.” My own thoughts on what comes after that, “what’s to be done,” can be found in the four-part essay “Socialist Survivalism,” here at MobyLives.