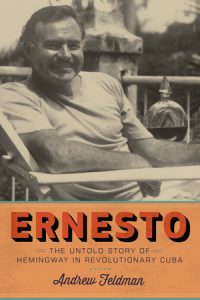 Coming this May from Melville House

Ernest Hemingway didn’t initially set out to write The Old Man And the Sea.

Deeply influenced by his years among Cuban fishermen (about which, much more here), the story was originally envisioned as a self-contained coda tacked on to the end of a maritime epic that at one point reached over 1,000 pages long. Even that epic itself was meant to be just one installment in a larger air, sea, land triptych.

Eventually, though, he recognized an ease of writing and sense of humanity in the coda that allowed it stand alone as the masterpiece that it is. That tiny book pulled down a Pulitzer Prize, won the author the Nobel, and has been read in just about every American high school English class.

Its adaptation history—the three films based on the book so far—is less rosy. Even the author himself walked out of the 1958 version starring Spencer Tracy.

But as Vanessa Thorpe reports for The Observer, an old friend of Hemingway’s has stepped in to make the faithful remake Hem always wanted—this time on stage.

A.E. Hotchner—friend and confidant of Hemingway’s, and later his biographer—with the help of his son Tim, has adapted the play for a stage performance that debuts this week at Point Park University’s Pittsburgh Playhouse. As Thorpe writes:

The result of many drafts, the final script of the new version, to be produced by the New York-based RWS Entertainment Group, introduces Hemingway himself as a character. “At first we didn’t know how to do it without it feeling like a one-man show, because there is a lot of stuff implied in the writing that you don’t see,” said Hotchner’s son Tim. “But then we thought for Hemingway this book came 11 years after he had success with For Whom the Bell Tolls, and so in a way he, like Santiago, had to go out and catch his ‘big marlin’ again too.”

Hotchner’s aim with this script was to communicate that the titular Old Man’s struggle was a struggle we all share—a sense of community across worlds that Hemingway only finally understood through his love for the Cuban people.