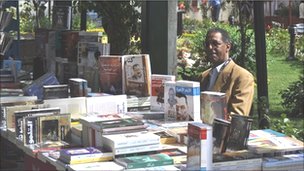 A vendor at the Tahrir Square Book Fair

To the rest of the world, Tahrir Square has become more than simply a place symbolic of and synonymous with the recent revolution. I personally can’t even say the word “Egypt” without thinking about Tahrir Square, which is perhaps as it should be. It was (and still is) a crucial battleground for a people finding their voice. And it was where the entire world focused its attention when word came that Mubarak had agreed to step down.

So it’s only fitting that Tahrir Square became the alternate destination for the Cairo book fair that was cancelled in January. Last week the inaugural Tahrir Square Book Fair took place, and as the BBC reports, the fair may set the tone for publishing in the Arab world for years to come.

“Writers and poets have been inspired,” Egyptian publisher Yasmine el Dorghamy told the BBC. “Indeed these events don’t just happen suddenly. It is like an engine that needs to be warmed up. It’s writing that pushed the people out [on to the streets] and vice versa.”

Another anonymous attendee was just as enthusiastic about the future of publishing and reading, pointing out that there had been a new surge in awareness of current events by young people. ”Me and my friends read a lot of opposition newspapers,” she told the BBC, “and that brought attention to corruption that was happening.”

Trevor Naylor, Associate Director of the American University in Cairo Press Bookstore and one of the organizers of the inaugural fair in Tahrir Square put it this way: “Almost every aspect of daily life, whether selling books or just normal conversation, has a revolutionary flavour to it. It completely dominates all thinking and creative output at the moment.”

Here’s hoping that free-speech advocates can maintain vigilance and insure all these newfound freedoms don’t slip.