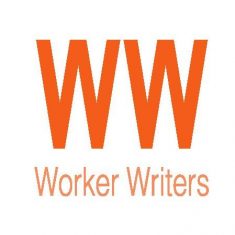 Last week, readers of the New York Times may have been excited to catch some very excellent literary news, in a report by Aimee Lee Ball titled “The Real Nanny Diaries.” The story concerned a writing workshop for domestic workers currently being held at the Brooklyn Public Library. Participants have come to Brooklyn from climes as remote as the Democratic Republic of Congo, Lithuania, and even Texas. The workshop offers a space for the writers to share their projects and provide each other with critique. It also offers domestic workers a point of possible solidarity — a place to discuss their lives, compare notes on their workplaces, and get to know each other. (Judging by Amy Lombard’s photo accompanying the piece, their sandwich game is pretty tight, too.)

Still, while it’s terrific for the workshop to have gotten some coverage, the article quickly provoked a storm of less-than-chuffed emails that have circulated among poets, editors, and labor organizers. There is one name that does not appear in the piece, to the bewilderment of many familiar with the story. Friends and colleagues of Mark Nowak were dumbstruck.

It’s no secret that Nowak is the creative force behind the workshop, and many others like it. Nowak, fifty-three, is a poet—Adrienne Rich once credited him with “regenerating the rich tradition of working-class literature”—and the author of three books, all published by Coffee House Press. The most recent, Coal Mountain Elementary, is a tapestry of transcribed statements by survivors of the Sago Mine disaster rescue, educational materials from the American Coal Foundation, news accounts of Chinese mining disasters, and scenes from the Chinese mining industry photographed by Ian Teh.

Inspired by a visit to the worker-occupied factories of Argentina, Nowak hosted his first workshop in 2006, with members of the Teamsters and the International Brotherhood of Electrical Workers. In the following years, he began holding workshops in factories around the world, expanding his collaborations to include taxi drivers, domestic workers, and others. He is the founder and director of Worker Writers, an institute that “organizes and facilitates poetry workshops with global trade unions, workers’ centers, and other progressive labor organizations. These workshops create a space for participants to re-imagine their working lives, nurture new literary voices directly from the global working class, and produce new tactics and imagine new futures for working class social change.” (This fall, Nowak hosted our own Mark Bray, author of Antifa, in a program that also included Pulitzer Prize-winning poet Tyehimba Jess, Asian American Writers’ Workshop director Ken Chen, and other luminaries.)

In 2012, Nowak says, Jakab Orsos, then director of the PEN World Voices Festival, approached him about bringing some of his events to the festival. Nowak reached out to Domestic Workers United, and arranged a few months of workshops with members, culminating in an event at World Voices.

About a year and a half ago, not long after he’d become vice president of arts and culture at the Brooklyn Public Library, Orsos reached out to Nowak again, this time about bringing the workshops to the library. Nowak agreed, leading the first two workshops before recommending that Orsos hire educator Fadwa Abbas to take over. He did. Aimee Lee Ball is not a novice writer. She has co-authored or ghostwritten four books (including Cybill Shepherd’s Cybill Disobedience), and has bylines in publications including, besides the Times, National Geographic, Vogue, Mother Jones, Martha Stewart Living, New York, ELLE, GQ, O, Allure, and many others.

In Ball’s story, Orsos is portrayed as the sole creator of the workshop; it’s described as his “brainchild.” “When I was hired by the library, I noticed all these nannies coming through,” he tells Ball, “and I thought it would be interesting to start working with them in this way.”

Orsos’s statement doesn’t conflict with Nowak’s version of events — presumably, it tells the story of what led Orsos to contact Nowak, from his own perspective. But Ball cannot have done much background research without turning up Nowak’s involvement, which has been amply documented — including by the Times, in a 2013 story by Matt Flegenheimer, which explains the relationship like this:

These are the bards of gridlock, a group of New York City’s yellow taxi drivers coached in recent weeks to produce a series of poems about their jobs, to be presented as part of the PEN World Voices Festival. On Saturday, inside a darkened theater on Lafayette Street, the drivers recited their work as a roomful of the city’s literary class observed. “The idea is to take the creative writing workshop out into the community of workers,” said Mark Nowak, the group’s instructor and the director of the master’s program in creative writing at Manhattanville College. Mr. Nowak said he had in the past organized similar workshops for Ford autoworkers in Minnesota, Somali nurses, and electricians from Chicago.

The point is further driven home in a litany of easily-googled pieces, published by the Poetry Foundation, the New Yorker, and other outlets.

We reached out to Orsos, who was proud of the “important and meaningful program” at the library, one that “provides an opportunity—in the safe space of the Library—for participants, through the lens of writing, to develop a framework where they can better understand themselves and others.” He said he’d been clear with Ball, telling her that “Mark Nowak’s role as the creator of the concept of writing workshops for domestic workers, cab drivers, farmers and the like was crucial to this project.”

“His omission from the article,” he added, “is most unfortunate.”

For Nowak, there’s nothing ancillary about the workshops: they’re a core element of his writing practice. We reached out to Caroline Casey, managing director at Coffee House, who characterized the ethical and political stakes of Nowak’s work:

Mark Nowak is the kind of artist whose practice exemplifies Simone Weil’s idea that “attention is the rarest and purest form of generosity.” All art is political, of course, in what it choses to say and not say, but Mark’s work, both on the page and as an activist and teacher, is more than political — it’s a moral act, and a shining of light on people and places whose inherent interest and dignity deserve every lumen of that attention. It’s not just socially productive, it’s better art because of that.

As for Nowak himself, we asked him how the workshops relate to his poetry, and he was unambiguous, if characteristically modest:

All part of the same commitment, for sure. Before I left for grad school (for my MFA), I’d spent the previous eight years—the entire Reagan two-term presidency—working at the same Wendy’s restaurant on the east side of Buffalo, New York. My dad was vice president of his union at Westinghouse for more than fifteen years. My grandma, who dropped out of middle school to become a domestic worker herself, was a southpaw Rosie-the-Riveter and a Teamster, and her husband, my grandfather, worked in the roll mill at Bethlehem Steel. So, it certainly grows from that social history, but also from trying to create spaces for new narratives by new narrators about working-class lives, to be an organizer and an advocate for this, too. And to do all this in conjunction and collaboration with today’s vital social movements. Also, since I first started grad school, I was fortunate enough to be able to teach in poets-in-the schools and poets-in-the-prisons programs, and I felt that this kind of program should be available to workers and trade unions and workers’ centers, too.

There’s more, then, on the line here than Nowak’s deservingness of credit for his work (though that). Absent from Ball’s piece is the political context that Nowak readily and consistently invokes when describing the workshops, his efforts to strike “an equal balance on craft and solidarity, shortchanging neither.” Listing the impressive series of activist organizations with which Worker Writers has partnered—Domestic Workers United, the New York Taxi Workers Alliance, the Retail Action Project, the NY Workers Center Federation, the Street Vendor Project, Haitian Women for Haitian Refugees, Picture the Homeless—he emphasizes his goal of “collaborating with both literary organizations and social movements,” adding, “I always say that both of these kinds of organizations need to be present for our collaboration to be truly successful.”

One need only spend a few minutes talking with Nowak, who has a gentle manner and easy laugh, to understand that sour grapes aren’t exactly his thing. Though he says nobody from the Times or the library reached out to him—he became aware of the article only after it was in print—what troubles him most isn’t a feeling of having been personally short-changed:

What the Times wrote about, to me, aren’t “The Real Nanny Diaries” at all. The real domestic-workers-as-writers story is the ongoing literary work being produced by members of Domestic Workers United and organizers like Christine Lewis, Lizeth Palencia, and others, domestic workers who have been writing poems in our group for seven years now, coming every month to our workshops at PEN, reading and analyzing poets like Nancy Morejón, Mahmoud Darwish, Natalie Diaz, Leopold Senghor, and so many others. These domestic workers have been creating renga and lyric poems and documentary poems about not only their struggles, but their amazing acts of resistance, too. They have been on the front line of organizing mostly immigrant women workers who have been left out of all federal labor laws, including organizing and struggling for the passage the first Domestic Worker Bill of Rights — which New York Governor David Paterson signed into law in 2011. It is not clear whether the paper will be revisiting the story. While he expresses dismay at the reporter’s failure to follow up on his comments about Nowak, Orsos has not reached out to Ball or the Times to ask what happened. Nowak has, and says he’s been encouraged by the response so far, but nothing more. Ball did not respond to an email requesting comment (on, admittedly, rather short notice); we’ll update the story if we hear back from her.

For now, the situation remains mysterious. It’s almost impossible to imagine any research into the workshop failing to turn up Nowak’s central involvement. Orsos and others told Ball it was Nowak’s baby. And here we are.

Speaking last year with Zaina Alsous of the New Inquiry, Nowak said, “One of the things we’re trying to do at the Worker Writers School is to bring the incredible range of global political literature to the workshop environment and use those works as inspiration and models for participants who come from these fabulous worker centers in New York City… We look at poets from across the spectrum, many of whom have been largely either excised from the canon or never managed to be considered for it in the first place, poets who maybe haven’t won prestigious awards or been in the anthologies usually taught in university classrooms but who nevertheless we feel are vital poets of today.”

There is, it seems, a lineage of exclusion Nowak’s aware of, and, lamentable though this is, it places him, at least, in some excellent company.