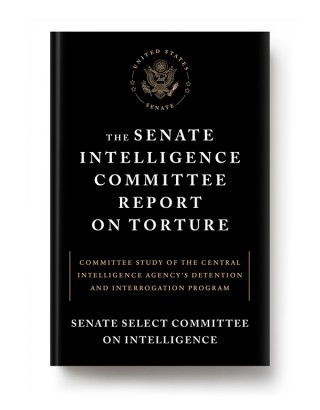 “I happen to feel that [torture] does work,” Donald Trump said in a joint conference with U.K. Prime Minister Theresa May on Friday.

Well, Mr. President, I “happen to feel” that as our new commander-in-chief, you might do well to consult The Senate Intelligence Committee Report on Torture, which summarizes more than six million internal CIA documents, the history of the CIA’s Detention and Interrogation Program from its inception in 2001 to its termination in 2009, and a review of each of the 119 known individuals who were held in CIA custody during that period.

The original document, which was made available to the public in December 2014, is a little unwieldy, but no worries: we typeset it and created a searchable epub file that you can get here. If you like, Mr. Trump, we’ll gladly hook you up with a free copy.

You’ll find that the very first page of the report states, unequivocally, “The CIA’s use of its enhanced interrogation techniques was not an effective means of acquiring intelligence or gaining cooperation from detainees.” (NB: “Enhanced interrogation” is basically just a fancy word for “torture.”) I might also point you to our foreword by Senator Dianne Feinstein—who from 2009 to 2015 chaired the Senate Select Committee on Intelligence—which says, “The major lesson of this report is that regardless of the pressures and the need to act, the Intelligence Community’s actions must always reflect who we are as a nation, and adhere to our laws and standards. It is precisely at these times of national crisis that our government must be guided by the lessons of our history and subject decisions to internal and external review.”

Let me know if you want me to put a copy in the mail.