Ever wonder what it’d be like to see a TV show written by its star actor? Look no further than Scratchman, an upcoming Doctor Who novel by the Fourth Doctor himself, Tom Baker. The novel features the Fourth Doctor and two of his companions, Sarah Jane Smith and Harry Sullivan, as they face off against a creature called the Scratchman. From the synopsis via Gizmodo:

“In his first-ever Doctor Who novel, Tom Baker’s incredible imagination is given free rein. A story so epic it was originally intended for the big screen, Scratchman is a gripping, white-knuckle thriller almost forty years in the making.

The Doctor, Harry and Sarah Jane Smith arrive at a remote Scottish island, when their holiday is cut short by the appearance of strange creatures – hideous scarecrows, who are preying on the local population. The islanders are living in fear, and the Doctor vows to save them all. But it doesn’t go to plan – the time travellers have fallen into a trap, and Scratchman is coming for them.

With the fate of the universe hanging in the balance, the Doctor must battle an ancient force from another dimension, one who claims to be the Devil. Scratchman wants to know what the Doctor is most afraid of. And the Doctor’s worst nightmares are coming out to play…”

The idea came about in the 1970s, during Tom Baker’s time as the Fourth Doctor. In between takes, Baker bounced ideas off co-star Ian Marter, who played Harry Sullivan. Their brainstorming eventually made it into a script, which subsequently failed to make it to the screen and ended up sitting around in an archive for almost forty years. 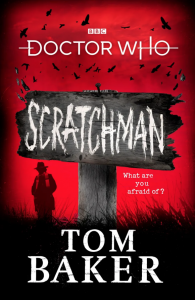 Fans have long been interested in the script, which, according to the Doctor Who fan wiki (warning: mad speculation and potential spoilers ahead!), was meant to star Vincent Price and Twiggy alongside the main characters. Some even sent money to Baker to fund the film, which he immediately returned.

Now, the script will finally see the light of day in the form of a novelization, which was co-authored by author James Goss, whose previous works include Doctor Who: The Missy Chronicles, The 10th Doctor Adventures: Death and the Queen, and many more Doctor Who novels. The book will be released in hardback on January 24th, 2019 by BBC Books, an imprint of Penguin Random House. Although it by far isn’t the first Doctor Who novel to be published, it is the first one to be co-written by one of the Doctors.

“I love the improbability of Doctor Who,” Baker said in a release. “Reason plays no part at all. As in religion, the overriding thing is faith. It may be improbable, but just believe in it and it’ll all come right.”