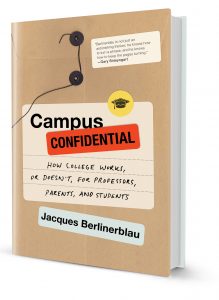 As my book Campus Confidential: How College Works, or Doesn’t, for Professors, Parents, and Students is published today, I feel compelled to discuss some of the influences that drove me to write it.

Like most professors of literature, I spend my average day in the embowering shade of texts – you know, serious texts. I’m snootily discriminating about the books I consume. And why shouldn’t I be—after all, does the ballerina frequent Taco Bell? As such, I never, ever, under any circumstances, partake of such rituals as “the beach read” or “reading for pleasure.”

Except for once. The text in question was Anthony Bourdain’s Kitchen Confidential: Adventures in the Culinary Underbelly, which I spotted lying around on a downtown E train, if memory serves. It made me think about chefs—about whom I had never once thought before. It also helped me contextualize a bizarre experience I’d once had with a chef during the course of my graduate studies.

I spent the summer of 1990 in Paris, researching my thesis at the College de France. Mornings and afternoons were devoted to expanding my bibliography and footnotes so as to pump up my manuscript to Anna Karenina dimensions. Evenings were passed in a tiny chambre de bonne, the likes of which would drive Count Vronsky to distraction. Its dingy, always-occupied bathroom was located down a long, poorly lighted corridor.

Each night at around 2 am, a hulking, portly, unshaven fellow would knock on my door. This gentleman always came bearing the same gift: a small, potted, oddly phallic-looking cactus. For the first few evenings we bantered amiably about his wife and kids in Marseilles. But after the sixth offering of a pencil-shaped cactus, I began declining to receive my peculiar guest.

He’d knock. I’d pretend I wasn’t there. He’d say things like, “Jacques, my boy, come out and play!” I’d sit silently, catatonically, on my bed. He’d implore. I’d ignore. Then, after a few nights of this, while I was leaning on the wall outside the bathroom, waiting for its eternal occupant to decamp, I spotted the glowering chef stomping my way, clutching his cactus.

I once read the most fascinating anthropological study. It argued that rituals of violence among human males obey culturally choreographed codes, replete with subtle triggering displays of subordination. In retrospect, I now recognize the cultural code I failed to observe that night, the trigger I accidentally set off: I ought not have rapidly backed up, my face contorted in fear. It is imprudent to cede ground to a large, affronted, plant-bearing man. And even more so when you are holding a copy of a (serious) text like Milan Kundera’s La vie est ailleurs.

The chase was on. Visually, the ensuing scene combined the stoner slapstick of Scooby Doo with the hallway horror of Catherine Deneuve’s freakout in Repulsion. Having made it to my room with seconds to spare, I endured a quarter hour of the chef pounding and kicking my door. That barrier did not prevent me from smelling a mushroom cloud of Perroquet a la menthe, a gallon of which he seemed to have latterly consumed. The chef availed himself of the opportunity to tap into Gaul’s rich vein of homophobic taunts. Prior to relenting, he remarked that he knew precisely what a dirty little coquette like me really wanted.

That experience lay dormant—repressed, actually—until I read Kitchen Confidential a decade later. Suddenly, all that unpleasantness in Paris suddenly made perfect sense. The derangement of my tormentor, the utter inscrutability of his motives, the fondness for cacti—all that could pretty much describe half the cooks traipsing through Bourdain’s story world. Thanks to that book, I had suddenly acquired the tools to comprehend my every subsequent encounter with a chef. To this day, whenever I see a chef, I feel I understand a chef.

There were many other virtues about Kitchen Confidential. I appreciated how it gave readers access to an unknown universe located but a few yards beyond their place settings and forks. Further, it was abundantly clear to me that Mr. Bourdain, how you say, did not give a shit. The author was unfettered by any allegiance to, respect for, or illusions about his beloved vocation. Wherever there lay a Professional Secret Under No Circumstances To Be Divulged, Bourdain was going to share it, with the directness of any braggart, drunk, or freshly dismissed FBI director. His fealty was to his reader, not his guild.

I soon realized Bourdain’s book could serve as a model for the story I wanted to tell about the liberal arts professoriate. Or let me be more precise: It was a model for the story I wanted—and still want—to tell about the liberal arts professoriate at the very moment that its world is collapsing. Reality itself is pounding and kicking on the Academy’s door, but, unlike a certain cook, Reality is sober and free of prejudice. Reality is shouting that we humanists are useless, lazy, and arrogant. Reality, in truth, has been saying that since time immemorial, but now Reality’s message is growing more specifc—and, for those of us making a life in the ivy-draped halls of education, more worrisome. In plangent tones, Reality wishes to convey that the American professoriate is about to get rolled.