The Canal inches toward "Not The Booker" 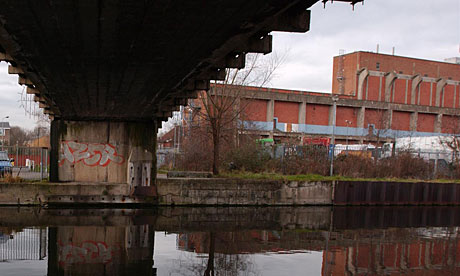 East London in all of its glory

The reviews for nominees of the Guardian’s Not The Booker prize are starting to come in and Lee Rourke‘s The Canal was the featured title yesterday. Sam Jordison said in his review that, “The Canal is quite unlike any English language novel I can remember reading recently…. Unusually for a novel of ideas, it’s the story and the writing that most appeal in The Canal. That and the skill with which Rourke uses his narrative to force his narrator out of most of his existential posing.”

We were also pleased yesterday to find out that Lee has won Amazon UK’s “Rising Stars” award. Congrats, Lee! A Q & A was posted on Amazon UK’s website if you’d like to check it out.

Which leads us to a bit more shilling and promoting.

Last week we asked booksellers to send us their pictures of their “Not The Booker” displays. Apparently, shyness has been sweeping through the shelves of bookstores recently as it seems many of you are too timid to toot your bookstore’s horns. Let’s see if we can’t pull you out of your shells. So, to repeat: Send us your pics of your “Not The Booker” displays and, between now and the time of the announcement, we’ll feature one bookstore on MobyLives per week. When the “Not The Booker” is announced–regardless of the outcome–we’ll select our favorite display and send you a bunch of signed copies of The Canal. So send your submissions (with subject heading “Not The Booker”) to [email protected]

Heck, let’s open it up a bit to you non-booksellers right now. First three respondents — booksellers or no — get a signed copy.