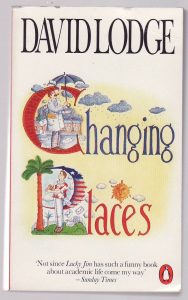 The “campus novel” is one of the few things with the word “campus” in it that is beloved by many. (Did you love the “Campus Police” when they confiscated your roach clip and Deluxe Beer Pong Set?) As such, there are many listicles devoted to exemplary Campus Novels (and movies), such as this one, and this one, and this one over here.

To this I have little to add, except to demur that David Lodge’s Changing Places and Small World are the finest campus novels penned by mortals. What I offer below is a biased, whimsical, and un-comprehensive assessment of the art form. My task: to identify who gets it right and who gets it wrong, and, hopefully, amuse you in the process.

Gets it right: The Human Stain, by Philip Milton Roth. Remind me to write a double-blind peer-reviewed article about how Roth is one of the most prolific and least recognized campus novelists out there (I mean, he gave us Mickey Sabbath, an “adjunct professor of puppet theater” in Sabbath’s Theater; that alone ought earn him a Nobel Prize, no?). One of Roth’s greatest fabulations is Professor Delphine Roux. The villain of The Human Stain, she is a radical leftist feminist theorist who in her inner monologues reveals that she is no fan of campus feminists and hates theory. Also, she’s kind of racist.

Gets it wrong: The movie version of The Human Stain. Because they cut out the Delphine Roux character. Also because it is nearly physically impossible to make a good movie out of a Philip Roth novel — though see Elegy, (based on The Dying Animal) and Indignation as exceptions to this rule.

Gets it right: Blue Angel. I adore this 2000 novel from Francine Prose. My adoration is not so much attributable to its diabolical undergraduate protagonist, Angela Argo, who seems bent on destroying her professor’s life by ensnaring him in tawdry dorm-room sex (though I like that a lot!), but rather to how Prose is basically the Proust of professorial boredom. She understands the word-and-thought-defying drudgery of a scholar’s life. And she understands how that tedium leads us to do crazy shit. Gets it Wrong: 2005’s Mona Lisa Smile, starring Julia Roberts. No movie could possibly get it more wrong than this one. Why do all the freshmen look like they’re thirty years old? Why is an administrator auditing a class, secretly, on day one? Were the filmmakers not aware of Berlinerblau’s finding in Campus Confidential? There, Professor B concludes that the American college lecture hall is among the least accessible spaces in the world.

Gets it right: Zadie Smith’s On Beauty. What a beautiful and thoughtful work of prose this is. Smith’s send-up of profs trying to preen and strut on Day One of class (in order to assure that their registration numbers remain reasonable) is priceless. It’s funny cuz it’s true. Smith also unspools this lemon tart of an observation as two professors/adulterers ruminate on their lives and chosen vocation:

“God, when I think of this next semester I just feel sick. Nobody gives a fuck about Rembrandt … or Wallace Stevens.”

Gets it right: Anne Bernays’s 1989 Professor Romeo. Have I met professors like Jacob Barker, creepers who hit mercilessly on co-eds? Actually, I haven’t, though I’ve heard legends about such individuals. Bernays’s novel describes a world before sexual harassment was properly punished. Lecherous professors were mostly—though not completely—nuked in the 1980s and 1990s (at least on the undergraduate level). Unfortunately, the entire notion of healthy, mentoring professor-student relationships got nuked right along with it!

Gets it Wrong: Ask a Serious Professor of Literature what his or her favorite campus novel is and they’ll respond, seriously: Richard Fariña’s Been Down So Long It Looks like Up to Me. I couldn’t make any sense of this work — though I felt Serious and Scholarly in failing to do so. Gets it Right: Revenge of the Nerds. This is unequivocally the most juvenile and repulsive campus movie I have ever seen. It traffics in facile gender, ethnic, and racial stereotypes. But in its unremitting nastiness it inspires a kind of awe.

Gets it Right: Tom Wolfe’s 2004 I am Charlotte Simmons. For Wolfe’s portrait of entitled, date-rapey, Lax Bro frat boys there is no substitute. Few of Wolfe’s many critics noticed how deftly he understood the modern American college experience where professors are mostly irrelevant to undergraduate existence.

Gets it Right: Vladimir Nabokov’s 1953 Pnin. Because Professor Pnin, the most wayward and clueless of all scholars, asks the question that lies at the artichoke heart of our travail: “Is sorrow not … the only thing in the world people really possess?”