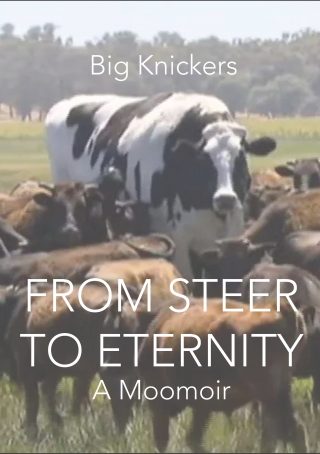 From Steer To Eternity: hail to the beef (orig. image: AuBC/Channel 7 Today Tonight)

Haven’t you herd? Just when you thought it couldn’t get any better than a chicken in trousers, the latest online animal curiosity has arrived in the form of an extremely large cow named Knickers.

Standing at 1.94m (6’4″), and weighing 220 stone – just shy of the world record-holding steer, Bellino, who lives in Italy and stands at 2.02 metres – Knickers (or, to give him his full name, ‘Big Knickers‘) is a bovine behemoth living on a farm near Perth, Australia. His was a quiet life until AuBC/Channel 7 reported on his gargantuan proportions, propelling him into the global spotlight.

The story was picked up by Kate Lyons in The Guardian, as well as just about every other news outlet in the world, and now Knickers has become an overnight star thanks to his awe-inspiring size, coupled with the heartwarming story of how he avoided the slaughterhouse by virtue of being too large for, er, ‘processing’…

As Geoff Pearson, Knickers’ presumably bewildered owner, says, “He’s too big for the chain, he’s out of spec, he’d be too heavy for the machines and he’d probably actually be hanging on the floor, so there would be contamination issues, and his cuts of meat would be too large.”

And so Knickers will be free to live out the rest of his days on the ranch – presumably now as a major tourist attraction. After all, this is Australia, the land that loves big things more than other things. Indeed, a giant watermelon recently won a nationwide competition to become the next Big Thing…

Social media has gone wild for Knickers, with speculation ranging from where you stand on the Knickers reaction spectrum to whether he’s even really that big (he is).

How long will it be before we see a Big Knickers book? We reckon a matter of days – and there’s likely to be a cattle battle between publishers. But in the meantime, here’s an exclusive extract from his imagined ‘moomoir’, titled From Steer to Eternity:

Wondrous news from farmer Geoff this a.m. – I am to be given a book deal! Just imagine, little old me (well, not so little…), a literary star! I must begin immediately, apparently, to capitalise on my ‘unexpected’ stardom. (Well, darlings, if you’ve been following my career, you’ll know I’ve worked bloody hard for this break – and I’m not about to let it get away! This is my mooment!)

And what’s more, if I get this book out of the way, I can wow the publisher with my detective thriller ‘Enemy of the Steak’… they have sent me a list of titles, and though they’re all rather corny, I suppose I must choose…

I rather like the latter, it appeals to my innate sense of scale. Anyway, I must get on with the meat of the book – I don’t want to be writing ‘on the hoof’, ahahaha!

Sorry, we’re all just really excited about the big cow still. Normal service will resume next week when we’ve all calfed down a bit.