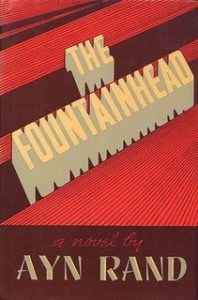 Ayn Rand’s novel The Fountainhead, which is worthless.

According to a press release, the Ayn Rand Institute, which blows, is set to distribute its four millionth copy of one of Ayn Rand’s books, which are stupid, sometime in the next four months. The book distribution is part of the ARI’s Free Books to Teachers program, which is an unpardonable waste of every resource that fuels it.

According to ARI president Jim Brown, who is wasting his life, the program was created to remedy a situation in which “Rand’s books were underrepresented [sic] in the classroom when compared to other well-known literary works.”

Rand, a Russian-born American novelist who should have chosen a different profession, devoted her life to the articulation and advancement of a convoluted form of selfishness. She called it Objectivism, which is a misnomer, and regarded it as a philosophy, which it isn’t. Besides The Fountainhead, Atlas Shrugged, and Anthem—her well-known novels, which stink—she wrote a number of theoretical tracts, which are worthless. In the sixties, she even co-wrote a book with future fed chair Alan Greenspan, who went on to arrogantly fuck the world over by implementing some of their shared ideas. It was lamentable.

In recent years, Rand has been a prominent hero to tech bros like Peter Thiel, who is a nightmare, and the broader Trump crowd, who are depraved.

Brown also pointed out that 2018, which is fast approaching, will mark the seventy-fifth anniversary of The Fountainhead’s publication, which is unworth comemmorating. “A variety of activities and events celebrating the best-selling novel and its continued impact on the culture are already in the works,” he said, which is really just too bad.