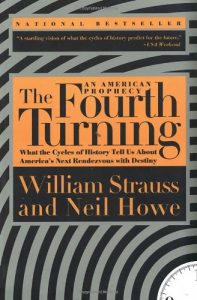 What do you say to a guy who invented the most overused word in the English language, gave the flunkies of American fascism their talking points, and still can’t quite make up his mind about it all?

The overused word is “millennials.” For years, it’s been strip-mined of its vaunted ability to turn brain-farts into think pieces, bad ideas into “tantalizing possibilities,” and angry-loon-yells-at-cloud types into respectablized TV pundits. Whatever utility it once possessed has been traded away like so many Alf pogs.

As for where the word came from, it was the invention of two authors, William Strauss and Neil Howe. The former died in 2007; the latter is alive and well, and living in Great Falls, Virginia. Neither was trained as a historian or social scientist, but in a series of books with titles like The Fourth Turning: An American Prophecy and Millennials Rising: The Next Great Generation, they nonetheless advanced their certainty of a recurring generational pattern that explained American history from the sixteenth century right up to the present. Their case is laid out in a viscous jargon that divides history into “saecula” composed of “turnings,” with “dominant” and “recessive” generations experiencing “awakenings” and “unravelings,” and so forth. The whole thing sounds like Giambattista Vico enthusiastically teaching you to play Settlers of Catan.

A good sample of the book’s tone, and some of the world’s response, can be found Michael Lind’s New York Times review of Fourth Turning. Wrap your eyeballs around this:

After introducing the non-falsifiable concept of the elastic saeculum, Mr. Strauss and Mr. Howe proceed to stupefy the determined reader with dozens of equally mystifying categories: not just Anglo-American Generations (from the millennial, 1982 onward, back to the Arthurian, 1433-60), but also Four Archetypes (Hero, Artist, Prophet, Nomad) and Four Turnings (whence the title). Put these together, and you get sentences like this: “An Unraveling cannot lead back to an Awakening, or forward to a High, without a Crisis in between.”

Not everyone felt this way, it should be said. Notably, non-crackpot historian David Kaiser wrote a sympathetic review of Fourth Turning in the Boston Globe. And Strauss’s Harvard classmate Al Gore so admired one of the cycle’s earlier volumes, Generations: The History of America’s Future, 1584 to 2069, that he sent a copy to every single member of congress.

And then there’s Steve “Gevalt” Bannon, the terrifying bigot for whom Trump invented the office of White House Chief Strategist, and a guy who makes Karl Rove look like Winston Fucking Churchill. Bannon, some years ago, became fixated on Strauss and Howe’s work. He even made a movie, Generation Zero, exploring and promoting their ideas. (This was under the aegis of Citizens United, the organization that successfully sued the federal government in 2010 to demand the recognition of limitless corporate cash as a form of political speech protected by the First Amendment.)

So it was interesting when, this weekend, a column appeared in the Washington Post bearing Neil Howe’s name. “Where did Steve Bannon get his worldview?” the headline asks. “From my book.”

In the 1,700 words that follow, Howe reiterates and stands by the claims of his and Strauss’s books, accusing the media of distorting them into something “absurdly apocalyptic” before predicting a “total war,” “possibly another financial crisis,” and “further adverse events.” On the question of why, faced with a total war, financial crisis, and further adverse events, it is “absurd” to call the situation “apocalyptic,” Howe is silent; he just alludes to other moments when the world didn’t end, and asserts that the present crisis will draw to a close in the late 2020s.

Howe’s defense of his ideas is even more troubling for something it does not offer: a repudiation of the odious uses to which those ideas are now being put. Of the blighted, anti-democratic politics that have cast the spotlight his way, Howe says nothing. The closest he comes is to aver that he and Strauss “never told Bannon what to say or think” and that he was “surprised” to hear Bannon, whose politics he had found “unusual” but “never… offensive,” espousing white nationalist views only a few years later. Might it be that Howe’s work was ripe for misuse? In the article, this idea just sits on the other end of the line, breathing heavily, saying nothing.

(It should be noted that Kaiser, for his part, has written in Time in light of the 2016 election, to clarify his stance on Strauss and Howe’s work, expressing his low regard for Bannon’s historical understanding, his hesitation to believe that a global war is being made inevitable by some configuration of Awakenings, Saecula, and the B&O Railroad, and his conviction that “apocalyptic rhetoric and apocalyptic thinking…. [represent] perhaps the biggest danger of the Trump era.”)

Just below the surface of Howe’s apologia lies a dangerously opportunistic effort to stake out a neutral ground that has long since ceased to exist. It joins a disturbing series of voices that will say anything to avoid the conclusion that Trump, anomalous as he is, nonetheless rode to power on a wave of sentiments and institutions that are all too familiar. Instead, these voices say: It’s the fourth turning, stupid. It’s Putin owns Washington, stupid. It’s third-party candidates, stupid.

But it wasn’t these things. There is no societal phrenology that can explain away the resonance of American racism, failed managerialism, bad-faith voter suppression, and so on that ring through Trump’s victory. And maybe more to the point, it is destructive to encourage the view that some cockamamie latticework of Nomad Generations, requisite Unravelings, and inevitable Turnings is deciding the fate of humanity far above our heads. Right now, all over the world, actual human persons are creating the history we’re living. And to paraphrase one reclaimed millennial who wrote many turnings ago, the point of our engagement with that history is not just to find ghostly patterns, but to change them.