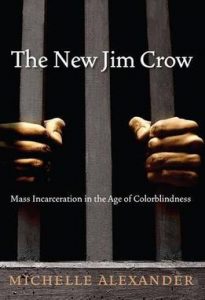 Busted. At least two prisons in New Jersey—the state that has, as Jon Swaine notes in the Guardian, the “widest disparity between white and black incarceration rates” in America—have banned inmates from reading Michelle Alexander’s bestselling 2010 book The New Jim Crow: Mass Incarceration in the Age of Colorblindness.

The American Civil Liberties Union wants to know why.

Bruce Shipkowski reported for the AP that a corrections department representative has not yet responded to a letter from ACLU attorney Tess Borden. But this isn’t exactly rocket science: The state whose prison system most egregiously represents the ways in which mass incarceration is effectively a system of racial control probably just doesn’t want its inmates getting any big ideas from a book that posits mass incarceration is a system of racial control.

“In its worst light,” Borden writes, “[the ban] looks like an attempt to keep impacted people uninformed about the history of the very injustice that defines their daily lives.”

The ACLU is calling for the New Jersey Department of Corrections to not only remove Alexander’s book from any lists of banned publications, but also to confirm that the book not be “censored or otherwise rejected in practice” and that the DOC will “review each facility’s policy and practice with respect to banned publications more broadly.”

For more, read Shaun King’s thoughtful piece for The Intercept.

UPDATE: It appears the ban has been lifted. Good work, everyone!

How far does censorship in prison libraries extend?