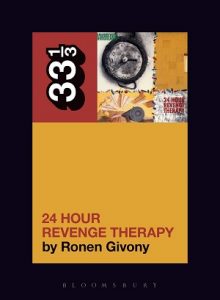 As we know, audiobooks are becoming a bigger slice of the publishing pie. This means that both publishers’ and audio companies’ thinking caps are presumably securely fastened, as they seek new ways to make audio publishing work for them.

In a press release last week, Bloomsbury announced that they’ll be partnering with the music streaming platform Spotify to publish their 33⅓ music books—you know, those little paperbacks, each on a particular album—in a “variety of formats.” The announcement says:

Once described as “one of the coolest publishing imprints on the planet”, 33 1/3 is a series of short books about popular music, focusing on a single album per book, with over 130 titles published. Occupying a unique place in the world of music writing, 33 1/3 has inspired a cult following through its singular coverage of artists ranging from Björk to J Dilla to Merle Haggard. This partnership with Spotify is a natural fit between the books and the music they cover, and will help bring the series to a new, wider audience of listeners.

Over at Forbes, Adam Rowe tries to help us break down some of this marketing speak. Rowe writes:

The content partnership highlights two interesting details about Spotify’s plans for future growth. First, it’s an indicator that Spotify’s audiobook content goals are aimed at superfans of the music streaming service: 33 1/3 is a series written by and for music obsessives, offering up installments about obscure classics alongside more well-known names like David Bowie, Nirvana, or Radiohead.
The second detail is a little less clear at this time: The “variety of formats” mentioned in the deal announcement is a little vague. Will Spotify be selling hardcopies of the audiobooks? Will it incorporate the albums being discussed themselves into 33 1/3 audiobooks, as a form of mixed media? This last option is perhaps the most likely: A combination album/book might alternate between album tracks and audiobook chapters. The purists may object, but many hoping to deepen their understanding of their favorite album would jump at the chance to listen.

The 33⅓ books, which usually take the form of a track-by-track appreciation of a beloved album, seem to be perfect candidates for the idea—often-discussed and easily achievable, but rarely implemented—of an enhanced audio book that interweaves music with a narrated text. There is enormous potential for these books to both show and tell.

If you’re anything like me, you think this is a cool experiment regardless of how many times your 33⅓ proposals have been rejected.