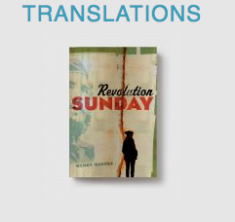 From the “Translations” category on the Melville House book page. We publish some translations.

You may have noticed that the National Book Foundation has launched a new annual award for best work of translated fiction or non-fiction. It’s welcome recognition for an area of publishing that’s exploded in recent years, and a return to form, since the NBA gave out a translation for sixteen years, before stopping in 1984. One wonders why they did, considering some of the books they’d recognized — stuff like Gregory Rabassa’s translation of Julio Cortázar’s Hopscotch (1967), William Weaver’s translation of Italo Calvino’s Cosmicomics (1969), and Richard Howard’s translation of Baudelaire’s The Flowers of Evil (1983).

How much has changed for the fortunes of international writers since 1984! For one thing, in the US, there are a lot more translations, by a lot more translators. That writers from all over the world are finding audiences is due in no small part to their craft, as well as the indefatigable publishers, periodicals, and university programs that give literature in translation consideration and focus.

Still, translations play the underdog, because America’s reading habits, compared with those of other countries, are notoriously provincial. An often-cited statistic is that, while in most countries between thirty and sixty percent of books published are translations, here it’s only three percent. This is popularly known among translation advocates as the “Three Percent Problem.” (And just for the record, these advocates have nothing to the with the Three Percenters, the American paramilitary gun advocate movement who named themselves after a statistic positing that only three percent of American colonialists took up arms against the British. Who knew?)

That statistic has always bugged me. For all the advances translation advocates have made,  can the actual numbers remain so dismal? After a bit of digging, it turns out the answer is a bit more complex than fuzzy math.

To get a handle on the issue, we reached out to Esther Allen, a professor, writer, and the translator of many books, including Antonio di Benedetto’s Zama. “The three percent figure was drawn from a fairly impressionistic 1999 NEA study that covered only literary fiction and poetry — roughly 3% of which (300 books out of roughly 10,000 literary titles that year) was translated from another language,” she said in an email. Allen was part of the research team. But that sampling, she suggests, can hardly have been representative, since literature and poetry make up a sizeable majority of translations. “It was never accurate as a total percentage of all books published, but that has been what it’s taken to mean. If you just look at all books published in 1999 (roughly 100,000) the figure should be more like .03%.”

300-ish titles is a small enough number that a single reader (I’m looking at you, Harold Bloom) could conceivably read all of them in a year. But in the nearly two decades since the study, that number has not shifted, despite, as Allen notes, the number having been “queried many times.” She goes on: “While there is no doubt that literature in translation is more widely read than it was a decade or so ago… it seems quite clear, as well, that as a percentage of total books translated the three perecent figure, inaccurate to begin with, has if anything decreased, given that exponentially more books are now published each year than in 1999.”

This being 2017, it’s not hard to imagine theoretical ways we might get better data — say, running an algorithm from resources that register books by category, like the Library of Congress or IndieBound. On the other hand, maybe comparing the number of novels in translation to the number of English originals is Sisyphean. Is there not some more tangible cause we might pursue?

Some of the places literature gets writetn.

Here’s one, something that came to mind last year when I published a Global Anthology at the Culture Trip. It was an online database that attempted to gather one short piece of fiction from every country in the world. During my research, I learned (and wrote about) just how many countries have rarely—or even never—had their literature translated into English.

So what about a challenge to address what I’ll call the Zero Percent Problem — that is, finding, translating, and accounting for literature from countries that have otherwise been overlooked by translators, and totally inaccessible to English-language readers?

Three notable examples (and believe me, there are more): Honduras, Thailand, and Vanuatu. Honduran literature, despite being written primarily in Spanish, a language that is well-translated, remains untranslated. Thailand because its language isn’t widely spoken or studied outside of the country — in fact, the first Thai work of literature by a living writer to appear in an English translation officially only did so last year, despite all signs indicating a thriving Thai literary culture. Vanuatu because reportedly only one novel has ever been published by a native Vanuatan, a work that only appeared a decade ago, meaning if you’ve read it, you’ve read all of Vanuatan literature. Crazy.

I was especially curious about why, despite the plethora of Spanish-language translations and translators, writing from places like Honduras (or much of Central America for that matter) had been so little translated. I asked Allen. “Walk into any bookstore in the Spanish-speaking world—even in Honduras or Costa Rica!—and you’ll find lots of books by writers from Argentina, Cuba, Mexico, and very few by writers from Honduras or Costa Rica! Some places have built up a richer literary culture and literary tradition of longer standing and greater renown than others.”

Similar sentiments were echoed by the Costa Rican writer Luís Chavez, whom I published and interviewed for the Global Anthology:

“With a few exceptions, Costa Rican culture tends to go unnoticed. This can also be said about its literary scene. This is not a bad thing, it is just a fact. A country with no major conflicts (at least that’s the idea people outside have about Costa Rica) is not attractive for foreign publishing houses. So our readers tend to be our fellow countrymen/women. But Costa Rica has a literary lineage that can be traced back to the early- to mid-20th century with writers such as José Marín Cañas, Fabiàn Dobles, Yolanda Oreamuno, and Virginia Grutter. Though they are all dead, Costa Rica’s contemporary literary scene is very much kept alive by writers such as: Rodolfo Arias, Osvaldo Sauma, María Montero, Carlos Cortés, Catalina Murillo, Gustavo A. Chaves, Carlos Fonseca, and Juanjo Muñoz Knudsen.”

But that doesn’t mean these writers don’t exist, and Allen suggests that things are evolving:

“I recently interviewed Rodrigo Hasbún, one of the first writers from Bolivia whose work has circulated outside the country; his book Affections has been warmly received in other Latin American countries and in Spain, and in translation into English, German and a number of other countries. By putting Bolivian literature on the map, making it a category in people’s minds, Rodrigo and other Bolivian writers and filmmakers of his generation are opening up new possibilities for their compatriots. Prior to the 1960s, few people anywhere outside of Latin America had read any Latin American literature. Perhaps the Boom of the 21st century will be in Bolivian and Honduran literature.”

We hope so. Maybe it’s time, at least, to take up the fight for more and broader translated literature in English.

In the meantime, please enjoy these stories from Honduras, Thailand, and Vanuatu. You’ll be a three percent better person for doing so.