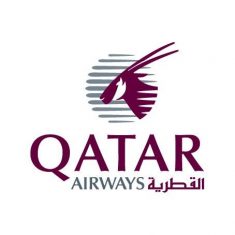 New York City’s attempts at reader engagement have led to several impressive initiatives throughout the five boroughs, like the recent library train cars sponsored by the NYPL (among others), Penguin Random House’s free commuter e-book offerings, and BuzzFeed’s “One Book, One City” campaign. And while all these services bring much-welcomed visibility to the city’s literary culture, a recent collaboration between a local non-profit and Qatar Airways is looking to bring books specifically to our city’s underprivileged children.

First Book is a national nonprofit that supplies children in need throughout the US with books and educational materials. 2017 marks the tenth anniversary of Qatar Airways’ services to the US, and the partnership hopes to highlight the airline’s commitment to being “global corporate citizens.” Some members of Qatar Airways cabin crews distributed books to dozens of children in Brooklyn last Friday, July 14.

“We are so grateful to Qatar Airways for their generous donation of 10,000 books to underserved students in New York,” said Kyle Zimmer, president and CEO of First Book. “But even more, we are inspired by Qatar Airways’ commitment to spreading the joy of reading, and the positive reading experience it has created for these students, with members of their own community who care about their futures.”

While this show of international love is heartwarming, accusations that Qatar Airways accepts illegal subsidies from the Qatari government have led US-based airlines to cut ties with the carrier this past year. Qatar Airways has also suffered recently from travel bans implemented against Qatari citizens by the governments of the United Arab Emirates, Egypt, and Bahrain, arising from alleged ties between the Qatari government and terrorist groups like ISIS.

In celebrating the ten years of US flight service—Qatar Airlines’ first flight to the US was June 28, 2007—the airline is showing its love to the city in other ways. Just last month they lit up the Empire State Building in the company’s colors.