Tar Macias, the child of immigrants and publisher of Hola America News, has something to say about DACA repeal 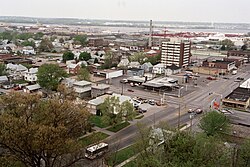 Tar Macias is the publisher of Hola America, a “fully bilingual news outlet that brings you the information and stories about the contributions that our Latino communities provide to the great states of Illinois and Iowa.” From where he lives and works in the Quad Cities region on the border between those two states, Macias also has something to say about Donald Trump’s most recent act of deranged malice, the order to repeal DACA.

Speaking to Jack Cullen at the Quad-City Times, Macias recounted his own journey as the child of undocumented parents who emigrated to the United States from Mexico in the late eighties. After graduating from high school in 1990, Macias was thrust into the legal and financial purgatory that many undocumented people inhabit. Unable to apply for federal funding to attend college, and unable to raise the funds himself, he found a job at a local comics store, and starting waiting tables at a local restaurant.

For many, the story ends here. But Macias got lucky. While waiting tables, he met a representative of Black Hawk Community College, who encouraged him to enroll in classes. After studying business administration for a few years, Macias dropped out and founded the newspaper that would eventually grow into the Hola America Media Group.

As Macias told Cullen, “Maybe I would still be waiting tables now if it wasn’t for people motivating me to go back to school… If we don’t support the DACA students, they’re going to be in the shadows instead of being doctors and engineers, the people we want them to be for the better of this country.” Which is why he’s been reaching out to affected community members, to build solidarity, and to provide some measure of reassurance.

Macia’s story is inspiring and dramatic, in part because his odds from the start were so bad. DACA, while flawed, was at least trying to do the obviously right thing, which is to allow children, who have no control over the manner in which they enter a country, a slightly better shot at success.

Macias, for his part, hopes that Congress can come up with a solution that surpasses the achievements of DACA. We certainly share his hope.