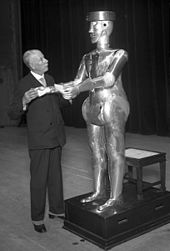 Folks, we had a good run. But recent events have clearly demonstrated that humans simply can’t hack it as the dominant species on the planet. We need help. Luckily, robot librarians are here to save us from ourselves.

Later this year, Dubai-based education technology firm ATLAB will release into classrooms across the United Arab Emirates a swarm of cutesy robots with cartoon eyelashes, penguin-arms, and robustly apportioned 3D cameras and infrared sensors that allow them to perform sophisticated facial analysis, recognizing authorized users and challenging “unknown strangers.” According to a report in Arabian Business, the platform, called TeachAssist, will function as a sort of in-class librarian, helping students locate and check out books, responding to questions, and pulling research materials from the cloud. It will also be capable of managing other teacherly duties such as checking attendance, and guiding students and visitors through the school.

The robot is a customised version of Qihan Technology’s Sanbot, a cloud-enabled “humanoid service robot,” running a souped-up version of the Android operating system, which can be customized to suit a variety of working environments. According to a recent Khaleej Times staff report, TeachAssist will be able to respond to a student’s voice and touch commands, and can even read posture and body language. It is also capable of projecting HD images and video à la R2-D2.

So, cool. We’ve arrived at the Jetsons-threshold of futurism.

The introduction of the TeachAssist comes at a time when the UAE is drastically overhauling its national educational standards and struggling to fill teaching vacancies in the private schools that have been proliferating across the country. Outside of the educational system, the Emirati labor force remains in a state of controversy and turmoil. According to Human Rights Watch, foreign migrants make up eighty percent of the UAE’s population, and ninety percent of its workforce. These workers are allowed into the labor force through a system of corporate sponsorship called kafala. Kafala systems are used in several Gulf states, and often give sponsors and employers an extraordinary amount of control over the lives of their workers. The UAE’s kafala system institutionalizes a condition of bonded servitude approaching slavery, in which employers can deport, abuse, and deny wages to migrant employees with impunity.

HRW and other human rights organizations have been putting pressure on the UAE to reform its kafala system for years, but progress has been slow, and uneven. Notably, recent legislation has brought foreign domestic workers into the same regulatory category as other laborers, which, if it’s enforced, would extend significant protections to the foreign nationals, almost all women, working in Emirati homes as nurses, maids, and nannies. So how does the Sanbot/TeachAssist fit into this complicated situation? It seems plausible enough that TeachAssist is a beachhead of automated domestic/educational labor in a market that—if recent history is any indicator—prefers unthinking, tireless drones to real human workers. We’ve already seen the large-scale evacuation of human labor from the industrial manufacturing base, and are beginning to see automated labor make serious inroads into typically white-collar industries. Now, technologies like Sanbot are targeting cultural work as well.

Last year, we covered steps the Emirati government is taking to make the UAE an international hub for literary and print culture, establishing a “Publishing City” compound in Sharjah, the nation’s cultural capital, and mandating that employers provide dedicated reading time to workers.

Robotic child-shepherds and state-sponsorsed leisure reading? This sounds like a pretty chill future, and I’m sure that the 100% of UAE nationals who live comfortably above the poverty line, with the seventh-highest per capita GDP in the world, would agree. They’ll be living in oil-backed, fully-automated luxury and they won’t have to deal with any restive foreigners complaining about working twenty-one-hour shifts folding laundry with no pay and no breaks.

What’s everyone else going to do? That’s a problem we haven’t yet invented a robot for.