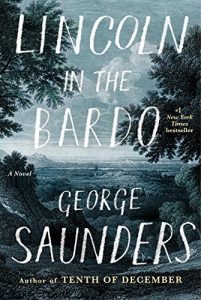 The winner of the Man Booker Prize, the UK’s most prestigious literary award, has been announced, and it’s a book by an American. Again.

George Saunders, beloved short-story author and What We Do Now contributor, won for his first-ever novel, Lincoln in the Bardo, a year after American author Paul Beatty won with The Sellout. Saunders beat Ali Smith, Fiona Mozley, Mohsin Hamid, and fellow Americans Paul Auster and Emily Fridlund. The trophy, which comes with £50,000, was presented to him on Wednesday night by the Duchess of Cornwall at London’s Guildhall.

If the best book won, you might ask, what does it matter where the author comes from? The chair of judges for the prize, Lola Young, told Sian Cain at the Guardian, “We don’t look at the nationality of the writer. Honestly it’s not an issue for us. We’re solely concerned with the book, what that book is telling us.”

This sounds reasonable. But it’s not the whole story. Alison Flood wrote an interesting piece for the Guardian’s book blog this week, before the winner was announced. Analysing some trends reported by Kiera O’Brien, the charts editor at the Bookseller, Flood writes:

Looking at the previous 47 winners of the award, O’Brien has found that (rather unsurprisingly) the average Booker prizewinner is an English, white, privately educated man in his late 40s, who has written a book of less than 400 pages that has a male protagonist.

The prize, she writes, has had 31 male winners, and 16 female. Ten of those have been from BAME (black, Asian and minority ethnic) backgrounds – two of them, Marlon James and Paul Beatty, in the last two years. Winners are “overwhelmingly English”, with a 26:19 ratio of private to state-educated. Nine went to Oxford, four went to Cambridge, and four didn’t go to university at all.

It sounds like the nationality issue could be the least of our worries. You are twice as likely to win if you’re a man and three times as likely if you’re white. Depressingly, Flood also wrote in 2015 about a fact Nicola Griffith had determined, that “a novel is more likely to land a prize if the focus of the narrative is male.” She notes this week that the most recent book with a woman protagonist to win the Man Booker was 2007’s The Gathering, by Anne Enright.

What are these books telling us then?

As we reported last year, book sales in the UK are skewed hugely by prizes. Cain reports that “The Sellout has now sold more than 360,000 physical copies, with sales in the week after the prize announcement jumping by 658%.” The Bookseller has numbers on this year’s winner. They write that Lincoln in the Bardo has sold 9,892 print copies in the UK to date, according to Nielsen BookScan, and that Bloomsbury, the book’s publisher, is preparing to reprint 100,000 copies. That suggests that they agree with what we and others have written about the effects of prizes on book sales in the UK — and seems to say, if you’re a promoting a book that hasn’t at least been longlisted for a prize… well, good luck selling it in quantity.

So does it matter that the rules changed four years ago to allow Americans to win this British prize, and that since then two Americans have won? I’d argue it does. There are clearly issues of equality and diversity in UK literary awards, and broadening the prize has inevitably meant narrowing opportunities for British authors.

Last year, writers including Julian Barnes and Susan Hill were very vocal in their disapproval. I suspect, over the coming days and weeks, that such discontent may again rear its ugly head, regardless of how deserving the winning book may be. The issues here go deeper than that.