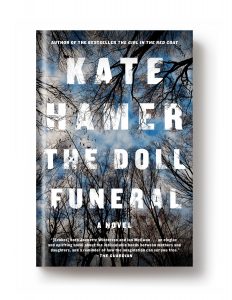 This week, as dig up our sunglasses and try to remember where left the slip ’n slide last August, we’re taking a look at some of the books we have forthcoming in the next few months.

The Doll Funeral is Kate Hamer’s follow-up to 2015’s hugely acclaimed The Girl in the Red Coat, and it’s already generating some buzz — in the Guardian, Melanie McGrath writes that it “evoke[s] both Jeanette Winterson and Ian McEwan,” praising “the originality of the voice and the novel’s moving mysteriousness, along with the empathy Hamer builds in the reader towards her scrappy, stubborn heroine.” She goes on to add, “This is an elegiac and uplifting novel about the indissoluble bonds between mothers and daughters and a reminder of how the imagination can set you free.”

Not half bad! By now you’re probably pretty excited—God knows we are—so, without further ado, here’s an early excerpt from the book. The first section, from 1970, focuses on the pregnant, young Anna. The next part, after a jump ahead to 1983, finds Anna’s biological daughter, Ruby, as a teen, reeling from the fresh revelation that she’s adopted. Get acquainted now, and be really excited for August 15, when the book’s out.