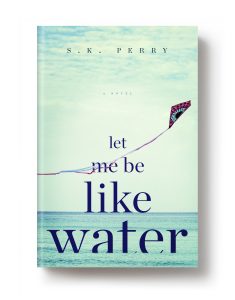 As summer gets going in earnest, we’re taking a look at some of the books we have forthcoming in the next few months. Honestly, we’re getting pretty excited. Right now, let’s have a look at S.K. Perry’s Let Me Be Like Water, which is already making a splash in the UK, and hits US shelves August 14th.

Twenty-something Holly has moved to Brighton to escape. But now she’s here, sitting on a bench, listening to the sea sway… How is she supposed to fill the void her boyfriend left when he died, leaving her behind?

She had thought she’d want to be on her own, but when she meets Frank, a retired magician who has experienced his own loss, the tide begins to shift. A moving and powerful debut from a former nominee for London’s Young Poet Laureate, Let Me Be Like Water is a book about the humdrum and extraordinariness of everyday life; of lost and new connections; of loneliness and friendship.

Let Me Be Like Water goes on sale stateside on August 14th. In the meantime, here are a couple short sections from the start of the book, so yankees will have something to look forward to.

I was sitting on a bench staring at the beach when Frank told me I’d dropped my keys. I was watching this little girl playing with a kite. She was quite a long way away, but she gave me something to look at. I can’t give you any details: maybe that her front teeth were missing, or that she had tangled hair. I don’t remember what I was thinking about, although I know I was wearing my red gloves.

I’d decided to get up and go, ready to continue walking. I was cold and sore from sitting, and at that precise moment I needed something that wasn’t the sea to be in front of me. I was about to stand up when Frank—who I didn’t know was Frank at the time—told me I’d dropped my keys.

He’d been watching the girl too, it turned out.

He pointed at the kite.

‘I have days where I’d like the wind to take me up like that. Some days it’s wanting to escape, I think, but on others, I’d just like to be a kite.’

I smiled. He handed me my keys.

‘Thank you. I didn’t know I’d dropped them.’

‘That’s OK. I dropped mine on a train track once, between the door and the platform. They had to be hooked back up again by the man from the ticket office. It turned out his name was Noel and he lived down my road. Funny world. What about you; would you like to be a kite, or would you pick something else?’

I stripped our bed the night before I left and sat on the floor while the washing machine spun. I watched the sheets twisting round. The bulge of the bowl made me think of a belly with a baby growing inside it. It hurt so much I thought there must be bruises. I needed to find something to hold that felt like you, so I pushed my fist into my mouth and bit down and cried into my knuckles.

It took me nine days to pack. When I got lonely I’d sit on the floor of the shower with the water switched on. Sometimes I’d feel tired, and I’d put down the jeans or the pants or whatever it was I was trying to put into a suitcase, and I’d slide into our bed. I’d lie still and think about how much I miss you. Other times I’d just cry, and my body would shake in that small way that starlings do when they fly together and their wings shudder like sadness in the sky.

I lay awake for most of the night and thought about the woman who was moving in in the morning. I put my suitcases into a big van, and it drove them from our little place in Hammersmith to the sea.

‘That’d be good,’ Frank replied. ‘Kites get to fly though; a yo-yo would be more like a permanent bungee jump.’

‘You were about to get going. Are you walking towards the pier?’

‘I thought I’d walk to the sailing club. I like the sound the boats make.’

‘Me too: the clinking,’ Frank said, and he smiled.