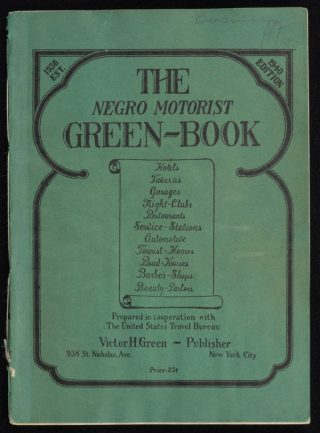 The Green Book is more recently known as a 2019 movie about Dr. Don Shirley, an African-American jazz pianist and composer (Mahershala Ali) and his driver/bodyguard (Viggo Mortensen) on their trip through segregated America during Dr. Shirley’s jazz tour in the 1960s. This year, the movie has been nominated for best picture, best actor (Mortensen), best supporting actor (Ali), best original screenplay and best film editing.

According to a recent report from Russell Contreras and Jay Reeves at AP, viewers have taken interest in the history of the Green Book, which was formally titled The Negro Motorist Green Book, and the current status of the businesses that were listed in the travel guide for African Americans in segregated America. (As it turns out, quite a few of the businesses that once offered black travelers a safe haven are still standing.)

Many versions of The Negro Motorist Green Book can be found in the New York Public Library Digital Collections. The first Green Book was published in 1936 and was created by Victor Hugo Green, an African American postal carrier in Harlem. An introduction in a 1949 edition reads:

“With the introduction of this travel guide in 1936, it has been our idea to give the Negro traveler information that will keep him from running into difficulties, embarrassments and to make his trips more enjoyable. … There will be a day sometime in the near future when this guide will not have to be published. That is when we as a race will have equal opportunities and privileges in the United States. It will be a great day for us to suspend this publication for then we can go wherever we please, and without embarrassment. But until that time comes we shall continue to publish this information for your convenience each year.”

According to History.com the last edition was printed in 1964. Though the guide is no longer published, the U.S. still has a ways to go before reaching the state of equal opportunity and privilege that Green hoped was so near.