Spring preview: The Island that Disappeared by Tom Feiling 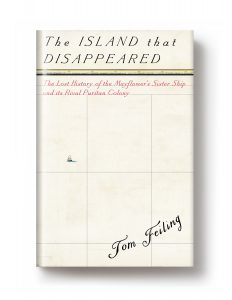 In The Island that Disappeared, Tom Feiling tells, for the first time, the story of the passengers aboard the Mayflower’s sister ship (the Seaflower), who in 1630 founded a rival puritan colony on an isolated Caribbean island called Providence — so small it doesn’t appear on most maps. Chaos ensued, and the great experiment failed. One hundred years later the disaster repeated itself.

Travelling to the island today, Feiling finds a new mix of puritans and pirates that make Providence a symbol of how the Western world took shape.

The Island That Disappeared hits shelves on March 20th. In the meantime, here’s a taste.

The company hoped that any teething pains the settlers might feel on arrival would be eased by the island’s Puritan minister, Rev. Lewis Morgan. Despite being only twenty-two, the company judged Morgan to be ‘a very sufficient scholar for his time, and a studious and sober man.’ He moved into the governor’s house, where he was expected to tend to the spiritual needs of Philip Bell and his family. Morgan liked Bell, calling him ‘a man whose countenance proclaims him grave, his words eloquent, his deeds religious—he is all a Christian.’ Morgan was delighted by Providence too: in a letter home, he compared it ‘to the Eden of God,’ and reveled in having found ‘all things according to our heart’s desire.’ He was confident that the settlers would soon have crops sufficient to fill the hold of the Seaflower. ‘Oranges, lemons, vines, pomegranates, rhubarb we have planted and they prosper. Indigo, cochineal, cloves, pepper, mace, nutmeg, raisins, currants and I doubt not but the land will bear as well as any land under heaven.’’

To fulfill his responsibility for the ‘well ordering’ of the settlers, Reverend Morgan was expected to lead them in prayer at sunrise, before they headed into the fields for the day, and again at sunset, ‘so that [God’s] blessing may be upon themselves and the whole island.’ At the end of evening prayers, Morgan liked to lead the congregation in the singing of psalms. Psalms were the godly alternative to ballads and folk songs, ‘which tend only to the nourishing of vice, and the corrupting of youth.’

Captain Rudyerd appreciated the need to inculcate Christian piety in his charges, but he had nothing but contempt for psalm singing, which was never part of traditional church services. Morgan was quick to upbraid the captain for his sacrilegious remarks, and Rudyerd took umbrage. As the younger brother of Sir Benjamin Rudyerd, and a cousin of the Earl of Warwick himself, Captain Rudyerd had left a grand lifestyle and solid connections in England. He demanded the respect of his peers, and the submission of his inferiors, of which a mere priest was undoubtedly one.

But Lewis Morgan stood his ground, and in so doing, became the conduit for the settlers’ grievances. He penned a letter to the company in which he complained that Captain Rudyerd’s drunkenness and high-handed treatment of the settlers had kept the colony in an uproar for as long as he had been there. He also took aim at the company: far from laying the foundations for a community of devout believers, the shareholders appeared to be ‘solely and covetously desirous of profit.’ He charged the shareholders with ‘putting on a hypocritical show of godliness for the encompassing of ungodly ends.’

While the shareholders awaited the return of the Seaflower, they set about ‘scouring the world for the richest commodities’ to furnish their island. Thanks to their friends at the East India Company and other trading ventures, the company’s dock at Deptford was soon crowded with barrels of exotic seedlings, shoots, and plants waiting to be shipped out to Providence on the next ship. There were rhubarb roots, pots of scorzonera (black salsify, a root vegetable thought to cure snakebite and the plague), and fustic saplings, which yielded a yellow dye coveted by England’s cloth manufacturers.

As they waited, their expenses mounted. Hire of the Seaflower, which they had already had for more than a year, was costing them £130 a month. The company’s treasurer, John Pym, urged patience; only with God’s blessing would their efforts be rewarded. The company was not alone in investing large sums in a new colony with little or no return: Between 1630 and 1643, England’s merchants and adventurers spent £200,000 (almost £18 million in today’s money) on hiring and fitting out two hundred ships for the voyage to the New World. None would see a return on his investment until the 1650s.

When the Seaflower finally made it back to London in March 1632, Capt. John Tanner explained that his return voyage had been delayed by an attack by the Spanish coast guard in the Straits of Florida at the end of December. He had lost an eye, many of his crew had been killed, and only after fighting their way clear of the Spanish ships had they been able to head out into the Atlantic. When the company opened the bundle of letters that Tanner was carrying, and read about his mistreatment of the Seaflower’s passengers on the outbound voyage, they were tempted to sack him, but in light of his stalwart defense of the company’s property, they chose not to. The company’s husband John Dyke was not so fortunate; for his sleight of hand in depriving the settlers of their victuals, he was ousted from the board.

When the contents of the Seaflower’s hold were brought onto the company’s dock, the shareholders were disappointed to find that the settlers had only sent home a few sacks of poor-quality tobacco. Lewis Morgan’s letter explained why: the colony was in a state little short of mutiny. Many of the settlers’ complaints—of the company’s monopoly on the sale of their produce and the prices in the company’s magazine—were to be expected. Others—of the oppressive heat of late summer and the storms that uprooted their young plants in autumn—were inevitable. But Morgan’s letter, which was ‘stuffed with bitter expressions and savouring a spirit inclined to sedition and mutiny,’ cast aspersions on the company’s very motives.

Such insubordination was insufferable. In tending to the settlers’ spiritual welfare, Reverend Morgan was to be absolutely free from meddling, whether by the island council or the company itself. In return, he was to be consulted on all matters of importance. But he had not been invited to sit on the island council, for the running of the colony was not his business. As far as the Puritan grandees were concerned, Lewis Morgan could never be more than a highly trained and valuable servant. In response to their complaints, the shareholders ‘bitterly reproved the people’ for their ‘infamous libels.’ They were akin to the Israelites, ‘who were not satisfied with the promise of that good land which God had provided for them.’ To punish the Israelites, God had ‘let their carcasses fall in the wilderness as men most unworthy to enjoy so great a blessing.’ The settlers should take care not to invite the same punishment, the company warned.

On sale today: The Island that Disappeared

The first film written in San Andres-Providencia Creole is here

The Island that DisappearedTom Feiling