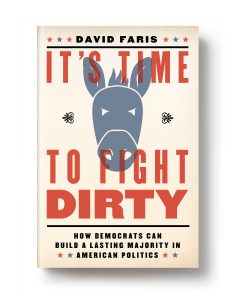 The American electoral system is clearly failing — more horrifically in the 2016 presidential election than ever before. In It’s Time to Fight Dirty, David Faris expands on his popular series for The Week to offer party leaders and supporters concrete strategies for lasting political reform — and in doing so lays the groundwork for a more progressive future. Equal parts playful irreverence and persuasive reasoning, It’s Time to Fight Dirty is essential reading as we head toward the 2018 midterms… and beyond.

The book hits stores on April 10th. In the meantime, here’s a short excerpt to get your blood flowing.

Since the shocking election of Donald Trump as the forty-fifth president of the United States, a lively and at times acrimonious debate has raged in the big tent of the American left. On one side are those who believe the Democratic Party should make a play for Trump voters by emphasizing progressive policy issues that appeal to the white working class—trade agreements, job retraining programs, universal healthcare, a basic income and more.[i] The idea that the Democrats must transform themselves into a continental European-style workers’ party is particularly popular with members of the Democratic Socialists of America (DSA) and other supporters of Senator Bernie Sanders who believe, not without evidence, that he would have made a better general election candidate than Hillary Clinton.[ii] Another faction, still clearly influential in the Democratic Party, believes that the path to a new majority runs through appealing to moderate, wealthy, suburban Republicans who are disgusted by Trump and abandoning “identity politics.”[iii] Still others believe that the party just needs to stay the course—to get its base of women, minorities, and young people to the polls in numbers similar to 2008 and 2012, and that pivoting to Trump voters will alienate their most reliable supporters.[iv] At times these competing visions have erupted into open warfare, with left-on-left Twitter looking like Day 110 of the Battle of the Somme, and at others they have led to vicious post-hoc recriminations about strategy, as when the DSA and its allies scoffed at Democratic candidate Jon Ossof’s cautious, noncombative strategy in the Georgia House special election that took place in June 2017.[v]

In It’s Time To Fight Dirty, I argue that all of the participants in this intra-left kerfuffle are failing to take the structural barriers to progressive power in this country seriously enough. Democrats will not build lasting power by landing on the right health care policy, or concocting the zingiest slogan, or targeting their last few million dollars in GOTV to this or that county in North Carolina. In fact, focusing only on policy or messaging or outreach would be a catastrophic mistake that will eventually land the party right back in the same position it is in now. It makes the mistake of believing that American politics is all about, or even mostly about policy differences between the contenders for public office, but you cannot win, in the long term, a policy or messaging fight on a playing field that is tilted hopelessly against you. You can sometimes come out on top in a football game in which you spot your opponents two touchdowns before the game begins, but, and this is critical, you will lose more often than you win. If Democrats and progressives decide to duel to the death, particularly while they are in the minority, over whether the federal minimum wage should be $13 or $15, they will do so from the political sidelines, as their adversaries in the GOP continued to use a rigged political system to exclude them from the conversation altogether.

The unfortunate truth is that voters are rarely able to make the link between the party in power and policies that benefit (or disadvantage) them. This means that even though millions of Americans may benefit from, for instance, the Affordable Care Act, they don’t necessarily credit Democrats for their gains. As political scientists Daniel Galvin and Chloe Thurston argue, “It is difficult for constituencies to form, for example, when policies lack visibility or traceability to the government.”[vi] Suzanne Mettler has theorized contemporary policymaking as part of a “submerged state,” where government’s efforts are intertwined with market actors, tax incentives, and other complex mechanisms that have the result of confusing the public about which group of policymakers is responsible for delivering benefits to them. Such policies, as Mettler argues, “obscure government’s role from the view of the general public, including those who number among their beneficiaries.”[vii] Voters are also unlikely to shift partisan preferences based on one party delivering some basket of policy goodies to them—far more likely is that their party loyalties will lead them to shift their policy preferences away from those being offered by the other side. This is how, for example, you get late night comedians corralling Trump voters who think Obamacare and the Affordable Care Act are different things.[viii] Overall, fully 35 percent of the public doesn’t know that these terms refer to the same law.[ix] And indeed, this lack of sophistication about policy led to an astonishing result in the 2016 election: “the positive correlation between geographical areas with the highest increases in enrollment for Obamacare and electoral support for Donald Trump in the 2016 election.”[x]

Democrats didn’t lose a policy fight in 2016. What they did was finish losing a procedural war that has been going on since the early 1990s. Indeed, the election of Donald Trump as the forty-fifth president of the United States was such an incomprehensible development that it obscured a very simple underlying reality: that the pathological liar and delusional narcissist currently residing half-time at the White House actually lost the presidential election by several million votes and took office because of the nonsensical, undemocratic Electoral College; that Democrats scored 11 million more votes for the U.S. Senate than Republicans only to wake up staring at a 52–48 deficit; that the national House vote was nearly even but delivered Republicans yet another overwhelming majority; that of the 230 million voting-eligible citizens of the United States, fewer than 139 million even bothered to turn out; that millions of Americans were shamefully deprived of their franchise by racist voter-ID laws and the cruel way that many states prevent current or former felons from voting; and that the United States is the only country in the entire world that holds its critical national elections on a regular working Tuesday as if we literally couldn’t care less who is able take off work to cast a ballot.

The bizarre quirks and preindustrial design features of the American constitutional system are in fact a five-star Epicurious recipe for how a radical minority of voters can capture and hold power in a democracy. These oddities almost exclusively favor the current voting coalition of the Republican Party, and GOP elites have ingeniously rolled out a long series of laws and court decisions to press their advantage—from the Citizens United atrocity that declared that money is speech, to depraved voter ID laws that obviously target people who are likely to vote Democratic—all dressed up in Orwellian pabulum about free speech and the need to prevent voting fraud. Since the end of the Cold War, the Gingrich radicals that took over the party in the early 1990s have been waging a relentless, brutal, and completely one-sided war against the Democrats, systematically using their lawmaking power to disadvantage their adversaries in elections and political mobilization. As E.J. Dionne argues, these aggressive, norm-violating procedural moves were the hallmark of a party “determined to use the power it had to lock in its advantages for the future.”[xi] One has to grudgingly respect the single-mindedness with which the GOP has pursued its advantage in the electoral arena, even as we condemn the morally bankrupt disenfranchisement of voters and the ugly circus they have brought to Congress. Democrats would be wise to learn from their adversaries, even as they cling to a set of minimal behavioral standards.