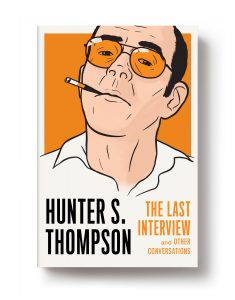 More than a decade after his death, Hunter S. Thompson is as popular—and as relevant—as ever. Vigorously political, he anticipated the current situation in Washington. In Hunter S. Thompson: The Last Interview and Other Conversations, a collection that ranges from an early conversation with Studs Terkel, to a decade-long exchange with editor David Streitfeld, to his last public interview (no longer available online), his prescience is both exhilarating and profound.

Here’s an excerpt from one of the interviews in the book, with the great David Streitfeld, in December 1990. Streitfeld also edited the collection, which hits stores on February 6th.

Hunter’s reputation is at a low ebb, and so is he. The masterpieces were long ago, and the general feeling among critics and even some fans is that he is coasting. In the stern culture of the pre-internet era, there is no greater insult. A true artist, it was believed, must continually top himself and not just deliver more of the same.

I was a young reporter for the Washington Post. I also wrote a freelance column for the paper’s book review. I told my girlfriend I’d be back in an hour and went off to see Hunter at the Carlyle Hotel, one of New York’s swankiest. My plan was to pick up a few pithy quotes for a column. I did not know then that Hunter never met a deadline.

For the seven million other people in New York City, it’s midafternoon. But for Hunter S. Thompson, it’s an unfriendly dawn. Breakfast for six is cooling in his suite’s living room, waiting for the star of the show to emerge. Occasional thuds can be heard as he moves around the bedroom, tiny collisions with the environment, which proves at least that he’s awake. Not to mention alive.

Few would have bet on it. Back in the early seventies, his physician wrote him a letter saying he’d be dead in a year if he didn’t slacken his intake of drugs and alcohol. The doctor then retired, confident in his warning, but recently Thompson heard from him again: “You have done amazing things since your death sixteen years ago…”

Making it through those years would be the principal one. The fifty-one-year-old practitioner of New Journalism who aced the form with Hell’s Angels, the inventor of Gonzo journalism in the classic Fear and Loathing in Las Vegas, the political writer who helped reshape the game with his coverage in Rolling Stone of the Nixon-McGovern match, has been reduced in his latest outing, Songs of the Doomed, to including snippets of unpublished novels and documents pertaining to a drug bust at his Colorado home.

From a literary point of view, in fact, it’s been a slide ever since his doctor told him he was done for. Maybe the doc was speaking metaphorically. Even Thompson’s latest gig, writing a column for the San Francisco Examiner, has come to an end in a welter of accusations about expenses.

“I think I’d better get back to writing for money pretty quick, or I might die,” he says in a letter to his agent that is lying on one of the tables in the suite. “I feel like a junkie who got trapped by accident in the Baghdad airport on the day of the Kuwait invasion — with no sleep, no cash, and just enough drugs to make it through the long flight to Rome… And then…

“What do you mean… the flight’s cancelled?!”

Two publicists are lingering, waiting only for Thompson to appear before they can disappear. They both have places to go on this Friday before Christmas, and in addition both are ill. In the meantime, they answer the phone. A waiter has brought up more eggs, the first batch having been deemed over-poached. The rejects lie scattered around the room, plump little white pods that could star in a remake of Invasion of the Body Snatchers.

The phone rings for the tenth time. It’s Jane Wenner, wife of Jann, the owner of Rolling Stone. Jann Wenner himself has called. Despite their regular public denunciations of each other, Jann and Thompson go back too far, and their reputations are too wrapped up in each other, for them to be anything but friends.

Thompson is talking on the phone in the bedroom to someone else. Out in the world, people are leaving work early, finishing their Christmas shopping, hanging the stockings by the chimney with care. In Suite 822 of the Carlyle, which goes for $600 a night, the new eggs are cold. One of the publicists sets about reheating them in the kitchen.

Eventually, the door to the bedroom opens. It’s not a grand entrance, but at this stage no one is picky. “ is is just so crazy,” ompson mutters by way of introduction. “I’ll never travel again without a huge sta . You should see how I was yesterday, with no one.”

He walks around the room, bottle of Chivas Regal in hand. With its trays of food, the room resembles an obstacle course. Thompson moves jerkily, as if his body weren’t quite used to locomotion. “Anyone want any of this food?” he says to no one in particular. “There’s a lot here.” His eggs are cold again.

The phone rings. It’s for him.

“I was hopeless yesterday,” he says into the mouthpiece.

“I kept bumping into things, cracked my knee on the TV set, all kinds of terrible things… Did you go to that George Plimpton thing last night? I was going to go and I just crashed.”

He sneezes. And again. “All I fucking need now.” And again. “I’m allergic to the telephone… Call me later.”

Thompson has propped open the door to the hallway, and now opens a window. “Gotta create a wind tunnel effect,” he says vaguely. Freezing air begins to move through the room. One of the publicists manages to slip away. Before the other can leave, she needs Thompson to sign a huge poster advertising Songs of the Doomed for the Hard Rock Café. This is easier said than done. For one thing, he can’t find a flat writing surface big enough to lay the poster on.

A low scream issues from his belly, and he nimbly flips one of the Villeroy & Boch breakfast plates off the coffee table and onto one of the room service carts, where it shatters. At least some space has been cleared. Unfortunately, the publicist has one more thing for him to sign, and the reaction is the same. This time he throws his pen. It hits several finely spun miniature carafes of tomato juice, breaking the necks off.

Writing, it seems, does not come easily to Thompson these days. The cover of Songs of the Doomed shows him shooting a typewriter. Quite a change from his heyday, when his pistol was a pen, or as he immodestly put it in 1975, “I am one of the best writers currently using the English language as both a musical instrument and a political weapon.”

The phone rings again. It is the New York Times, calling to see if he will write an op-ed piece. He has already lined up a regular column with Esquire. He will soon be going to the Soviet Union, a trip he says he will write up for Rolling Stone. There is a book in preparation on his drug trial. And he’s eager to complete a novel, Polo Is My Life.

From the letter to his agent: “I feel in the mood to write a long weird story — a tale so strange & terrible that it will change the brain of the normal reader forever… Which is not a crime—but almost, in some precincts—and in Arizona they hang you for it.

“A lot of bad weird things happen in Arizona. Power moves very nakedly in that corner of the desert, and only the rich survive to tell their side of the story… Every time I fly into Phoenix, for instance, I expect to be killed. Not immediately. Not at the airport. But almost any time after that… Hell, you never know in Arizona. Some people get killed and some don’t… But even if you get out alive, you always know somebody wanted to kill you; they just didn’t get around to it, this time.”

This is a nice piece of Gonzo writing. The writer agrees, offers to have a bellman go out and make copies. The last publicist is gone, despite Thompson’s pleas to remain. The phone is ringing. It’s his girlfriend, who is trapped in Colorado by a snowstorm and is finding herself unable to join him. He is distraught about the prospect of not seeing her, or maybe just at the notion of being alone.

When Thompson’s not moving, he still looks solid enough to kick the daylights out of an office candy machine, which is how he got fired from the Middletown Daily Record about 1960 or so. The hair is sparse—most of it, according to one account, fell out more than twenty-five years ago due to “repeated dosages of speed and cortisone and fear”—but the eyes can still make contact. When he’s not shouting, he’s capable of calming down into something resembling amiability.