Book publishing continues to be a powerful ally to truth in South Africa. As we wrote last week, headlines the continue to be dominated by investigative journalist Jacques Pauw’s new book, which makes accusations of widespread corruption against apartheid fighter, Mandela comrade, accused rapist, confirmed misogynist, and current president Jacob Zuma. It’s another string of accusations in what has already been a decade of government distrust under Zuma.

Before prepared remarks to the National Council of the Provinces (the upper house of South Africa’s legislature), Zuma mocked and dismissed—while, notably, not refuting—the book.

“As we made the presentation here we were saying what we have done — we were giving a report of what this ANC [the African National Congress, Zuma’s ruling party) has done. They can’t talk about it. They can’t engage it. They must then come with the books.” (He holds up a notebook, waving it around.) “This is the book. This is the book.” (He laughs audibly and shakes his head.)

Zuma is razzing the NCOP for questioning him about recent exposés—Pauw’s being the highest profile—instead of his annual report to the government. When pressed further, Zuma went on to say:

“That’s become the politics, the politics to use here: ‘That is the book, you know! This is the book. Can you say no to this book…’ Jirrrrr. Novels! It is people who sit down and just think and composition of people.” [sic] 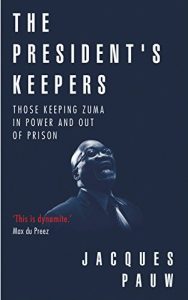 Tensions continued as MPs pressed Zuma on the topic and called for him to address recent accusations, which include his taking a salary from a Durban businessman while in office and controlling a mafia-like group of state officials and hired hands to enforce his wishes and preserve his power. “There can be no doubt anymore that Jacob Zuma is now the rampokker [Afrikaans for mobster] boss, the groot kokkedoor [big Kahuna],” MP Jacques Julius said. “How can we trust a man with our tax money if he has not filed tax returns himself?”

The question of tax disclosures by the nation’s leader, all too familiar to Americans, is also one Pauw brought up at his book launch last week. Zuma could disprove many of the charges against him—if they are, as he says, false—by his turning over tax returns for the years since he assumed the presidency.

Meanwhile, Pauw’s book, The President’s Keepers, remains out of stock, pending a reprint.

Will oft-embattled South African President Jacob Zuma finally be brought down by a book?