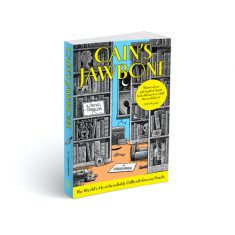 Cain’s Jawbone is a fiendish literary puzzle book that is almost impossible to solve. The author, Edward Powys Mathers, created cryptic crosswords for The Observer under the pseudonym Torquemada from 1926 until his death in 1939, but his murder mystery book is often heralded as his crowning glory. Largely forgotten about by the general public, Unbound reissued a new edition of Cain’s Jawbone in July 2021, and now, thanks to a series of TikTok videos that went viral, the book has reached astonishing new heights, 87 years after it was first published.

TikTok user Sarah Scannell has posted a series of videos of her attempting to solve the puzzle, racking up over 4 million views. In the whodunnit book, six people die and the reader is invited to deduce who the murderer is. However, the 100 pages in the book are jumbled in the wrong order and the possible number of combinations is absurd—a number so large it is not viable to write it down here as it would have 158 digits.

Back in the 1930s only two readers manager to solve the puzzle, and as a reward Mr S Sydney-Turner and Mr W S Kennedy both won £25. The solution was then thought to have been lost, until three years ago when Patrick Wildgust, curator of the Shandy Hall museum, part of The Laurence Sterne Trust (a charity that seeks to promote and preserve the legacy of the Tristram Shandy author), was presented with a copy of the old book. Intrigued, he embarked on a mission to solve the puzzle, putting out a call for help from Observer readers, and eventually, he cracked it. Wildgust tells The Observer:

“Tracking down the correct solution for Cain’s Jawbone was a risky venture, and one peppered with possible pitfalls… I can say no more on the subject, but eventually I was satisfied we were in possession of the correct solution. My hopes were that people who enjoyed Tristram Shandy might enjoy a game of glorious disorder, tortuous puns and spoonerisms.”

As a charity, The Laurence Sterne Trust could not afford to publish a new edition of the book themselves, but as fate would have it, the publisher of Unbound, and QI producer John Mitchinson, came into the museum one day and took an interest. Unbound decided to reissue the book, giving half of all book profits to The Laurence Sterne Trust and offering a £1,000 prize  to anyone who could solve the puzzle within a year. Remarkably there was one winner last year out of twelve entrants: British comedy writer and creator of Radio 4’s Cabin Pressure, John Finnemore. He told the Guardian:

“The first time I opened the box, I swiftly concluded that it was way out of my league, and the only way I’d even have a shot at it was if I were for some bizarre reason trapped in my own home for months on end, with nowhere to go and no one to see. Unfortunately, the universe heard me.

“It took me about four months – not continuously, but I had it spread out on the spare bed, and every so often I’d potter in, stare at it till my forehead bled, spend an hour online researching the history of Shrewsbury prison or something, swap three cards, move one back, and potter off again. How anyone solved it before the internet, I cannot begin to imagine.”

Now only Wildgust and Finnemore hold the key to the puzzle, and thanks to Scannell’s TikTok videos, demand for the book has never been higher. In fact, Unbound have totally sold out of stock and are rushing through a reprint of 10,000 copies due to arrive before Christmas. Scannell apparently discovered the book at her local independent bookshop, Green Apple Books in San Francisco. Undertaking the challenge, she said, as reported by the Guardian:

“I figured $10 wasn’t too big a loss if I couldn’t figure it out… Like I say in one of my TikToks, I have never read a murder mystery book before but I do love logic puzzles, which is why I bought the book in the first place.

“I can already tell that the language and cultural differences between not just 1934 and now but also England and American will be very difficult to navigate. But I put it all up on my bedroom wall so that it would be easier for me to work on it in short bursts,” she said. “I officially started on 2 November, but am really taking my time because my goal is just to get in an answer I’m happy with before the deadline next December. I really didn’t expect 4.5 million people to be joining me in this activity, but I genuinely don’t care if someone solves it before me. I’m just here to have fun on my own time.”

She has yet to solve the puzzle, but continues to post her progress on TikTok. On the surprise social media success, Publisher Mitchinson said:

“What makes me most happy about the TikTok success is that half the profits will go to the Laurence Sterne Trust. Sterne would have loved everything about this story… He adored setting literary puzzles and finding clever ways to market his books. People forget that Tristram Shandy was a huge bestseller in 1759: Sterne literally laughed all the way to the bank.”

If you’re brave enough to take on the challenge, Unbound is offering £250 to spend on their books to anyone who can solve the puzzle before 31st December 2022. Good luck, intrepid readers.