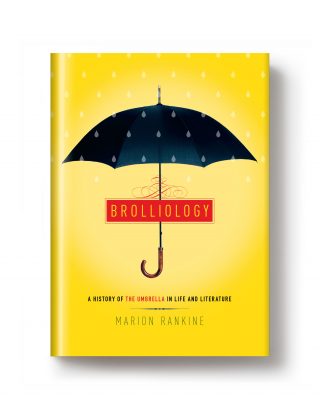 I’ve been fielding this question ever since I started talking about an odd little project of mine: I was writing a book about umbrellas. Umbrellas in literature, I would hasten to add. But also their history. And their various meanings in cultures around the world. At various times. So actually… yes. Just a book about umbrellas, really. And then, as I dithered into a lame silence, the inevitable, “But why?”

A disingenuous answer would be, “Why not?” I quite like poking about in dusty hallstands and cobwebby corners—both figurative and literal (and, indeed, literary)—so my attraction to these oft-forgotten, frequently lost, lurking-around-the-margins objects makes a kind of internal sense. There aren’t a great many books exclusively devoted to the humble umbrella. But there are plenty such everyday objects that surely deserve literary-historical books of their own: brooms, say, or mops; candles; baskets; lanterns; thimbles; picture frames; tea sets; birdcages. Why choose umbrellas?

In truth, it was the absence of a brolly that first prompted the thought (umbrellas are often best appreciated when they are not there). I was walking in the rain, umbrellaless. My hair was damp, and there was a chill breeze twitching the bare branches above me. I had recently visited the Barbican Centre to check out Random International’s Rain Room—an indoor rainstorm, equipped with sensors, that you could walk through without getting wet—and it got me thinking about shelteredness and protection and the various acts of our umbrella-ing: a folded newspaper held between our heads and the sky; a raincoat, a hat; a cheap spindly pop-up umbrella or a magnificent duck-headed canopy. My mind wandered to the book I was reading at the time—Milan Kundera’s The Unbearable Lightness of Being—and I remembered a vividly-drawn passage about umbrellas jostling on a crowded street. Then my mind leapt to Mary Poppins. Then Winnie-the-Pooh. And wasn’t there an umbrella in…?

I went home and started googling.

For a time, my reading was exclusively umbrella-driven. I read my first Hilary Mantel (The Giant, O’Brien), my first Graham Greene (The End of the Affair), and, at long last, Madame Bovary and Robinson Crusoe. With Howard’s End, my appreciation of EM Forster deepened still further. I delved back into my childhood with Tintin and Roald Dahl, and ploughed doggedly through Martin Chuzzlewit (I hated it; don’t @ me). Other literary umbrellas I encountered—with a sudden pop of delight in the chest—entirely by chance. It felt like an obsession, and perhaps it was: a drive to collect not objects but their typed traces on the page.

Sensing some parallels, a colleague urged Warren Motte’s remarkable book Mirror Gazing on me. Motte writes about moments in fiction where a character encounters their own reflection. He has thousands of them, collected over decades of reading, and weaves them into a rich meditation on the nature of selfhood, reading, obsession, and literature. It’s wonderful, and I fervently recommend it, but reading it was a wake-up call: this was not the kind of book I wanted to write. I didn’t fancy spending a preparatory thirty-five years reading, for one thing; besides, the idea of pinning every possible umbrella to a page (“Look! A fine specimen of Umbrella Forsteria, indirect descendant of the species Dickensiansis and Defœnia…”) sat at odds with what I was learning about their real-world counterparts. While haphazardly plunging through novel after novel, I was also studying the history of umbrellas. What I found astonished me. Umbrellas have a far longer, and richer, heritage than today’s flimsy, single-use models would suggest. They’ve been held aloft by rulers and chieftains, lovers and loners, priests, servants, revellers, slaves — just to name a few. Consequently, by association, they’ve taken on a vast range of meanings in different societies and cultures at different points in time.

What seemed, at first, a terribly niche literary project turned out to have near-universal relevance. Real-world umbrellas have been implicated in acts of racism, sexism, classism, colonialism, misogyny, homophobia, and transphobia, and the literary examples I was collecting chimed hauntingly with their historical and cultural patterns of signification. Of course, there’s no matching a writer for sheer joyful imagination: we are yet to see real-world manifestations of the magic-wand umbrellas, flying umbrellas, and umbrellas-as-boats we find in books. But in life, as in literature, umbrellas have had a vast range of uses: as murder weapons and defensive shields, sails and parachutes, sunshades and flirtation aids, disguises, religious icons, walking sticks, and status indicators.

And sometimes they’re even used to keep the rain off.

Brolliology is on sale now. Buy your copy here, or at your neighborhood independent bookstore.

Marion Rankine is a London-based writer and bookseller. Brolliology is her first book.