A betrayal hasn’t stung so keenly since Mark Rylance offered validation to the Oxford theory. 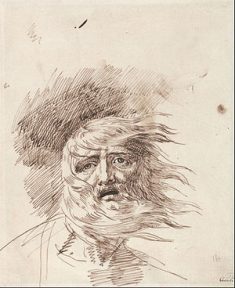 “Lear in the Storm,” by George Romney

Sir Antony Sher, two-time Laurence Olivier Award winner and member of the Royal Shakespeare Company since 1982 (and Prince Charles’s favorite actor), is making some headlines by implying that William Shakespeare was a misogynist. As The Guardian‘s Mark Brown reported this week, Sher made the comments during the Cheltenham Literature Festival, while in conversation with Oxford professor and Shakespearean academic Sir Jonathan Bate. The discussion centered on Sher’s recent, widely praised portrayal of King Lear, where the actor admitted to being shocked by some of the language Lear used for women. Per Brown:

“It is Lear’s attitude to Goneril particularly, when he curses her, he curses her womb … again it becomes very graphic,” he said, adding that there is something deep inside Lear that is misogynist.

… Sher’s interviewer, the Shakespearean academic Sir Jonathan Bate, said Sher might be on to something and there were “little bits of circumstantial evidence” that Shakespeare had syphilis.

Sher goes on to say that Lear’s misogyny can’t be explained away by dementia, because he was told as much by a psychologist. Bate adds that Lear is “painful to read, especially so nowadays where we’re so attuned to misogyny,” Anita Singh reports in The Telegraph. And Sher also floats the question of whether or not Shakespeare was gay – which he points out “of course doesn’t mean he was anti-women.”

Look. We’re not quite sure what it is about The Bard that makes people love to knock him down a peg, but the fact that neither Sher nor Bate could differentiate between the character Lear and the author Shakespeare is some prime pseudo-smartypants bullshit. If Shakespeare were holding up Lear, at his angry daughter-hating ranting-and-raving will-you-nill-you worst, as some paragon of Correct Way to Treat a Female, sure, these two might very well be on to something. But Bate and Sher seem to dismiss the pure fact that reading Lear is painful on purpose. It’s not some bizarre, accidental byproduct that the two of them just happen to be smart enough to glom onto. Shakespeare wants us uncomfortable in this play, from start to agonizing finish.

Neither man admits the possibility (which seems sort of obvious?) that Shakespeare made Lear so hateful precisely because Shakespeare himself was a feminist. Can’t it be very easily argued that Lear’s downfall (this is a tragedy, after all; not one of the histories) is predicated on his refusal to treat his daughters as humans, choosing instead to view them as symbols of his kingdom? And isn’t the lesson here — once he realizes his folly, Cordelia, the only daughter who felt affection toward him, is dead (spoiler alert) – that devaluing women is, in point of fact, absolutely and completely not good?

That really seems like the only logical take. Anyone who watches Lear and says, “Dang, that guy sure knows women!” and thinks that is the point the author is distilling for the reader is, honestly, not bright. Not to say that Sir Sher doesn’t have the right to his amazingly shitty take, but, c’mon: read the year. It’s 2018. Maybe a couple of men opining about the misogyny of a writer who clearly wrote very strong-willed, independent female characters isn’t exactly what is needed right now. But no, sure, whatever – the guy who wrote Beatrice and Katherine and Viola and Lady Macbeth and Rosalind actually hated women.