Sing it again, Goddess: Do we really need a new translation of the Iliad? 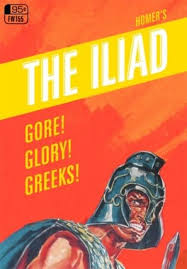 With three new translations of The Iliad plus a new edition of Richmond Lattimore‘s classic 1951 translation due out this month, The Economist wonders if it’s all really necessary. The article finds the new translations by Anthony Verity and Stephen Mitchell lacking in comparison to the Lattimore. Verity “fails to capture the full force of Homer’s work” while in the Mitchell translation…

…gone is the whole of Book Ten (“baroque and nasty”, apparently), most of the adjectives and fixed epithets that contribute to the life of Homer’s figures and, subsequently, most of the poetic value of Homer’s work.

Only poet Alice Oswald‘s Memorial–a radical shortened version which removes the heroic plotline and focuses instead on the experiences of the poem’s foot-soldiers–is considered worthwhile by The Economist: “Ms Oswald’s Memorial strips the Iliad down to its bare bones, capturing the terrifying brevity and brutality of the deaths…” (Read an interview with Oswald at The Guardian)

Here’s a taste of Oswald’s version (read more at The Poetry Archive):

For Homer-philes craving yet more translations, here’s a link to samples of 67 other versions from the last 400 years. For example…

SING, goddess, the anger of Peleus’ son Achilleus
and its devastation, which put pains thousandfold upon the Achaians,
hurled in their multitudes to the house of Hades strong souls
of heroes, but gave their bodies to be the delicate feasting
of dogs, of all birds, and the will of Zeus was accomplished
since that time when first there stood in division of conflict
Atreus’ son the lord of men and brilliant Achilleus.

Sing, MOUNTAIN GODDESS, sing through me
That anger which most ruinously
Inflamed Achilles, Peleus’ son,
And which, before the tale was done,
Had glutted Hell with champions—bold,
Stern spirits by the thousandfold;
Ravens and dogs their corpses ate.
For thus did ZEUS, who watched their fate,
See his resolve, first taken when
Proud Agamemnon, King of men,
An insult on Achilles cast,
Achieve accomplishment at last.

Rage–Goddess, sing the rage of Peleus’ son Achilles,
murderous, doomed, that cost the Achaens countless losses,
hurling down to the House of Daeth so many strudy souls,
great fighters’ souls, but made their bodies carrion,
feasts for the dogs and birds,
and the will of Zeus was moving toward its end.
Begin, Muse, when the two first broke and clashed,
Agamemnon lord of men and brilliant Achilles.

THE Wrath of Peleus‘ Son, the direful Spring
Of all the Grecian Woes, O Goddess, sing!
That Wrath which hurl’d to Pluto‘s gloomy Reign
The Souls of mighty Chiefs untimely slain;
Whose Limbs unbury’d on the naked Shore
Devouring Dogs and hungry Vultures tore.
Since Great Achilles and Atrides strove,
Such was the Sov’reign Doom, and such the Will of Jove.

Declare, O Muse! in what ill-fated Hour
Sprung the fierce Strife, from what offended Pow’r?
Latona‘s Son a dire Contagion spread,
And heap’d the Camp with Mountains of the Dead

O GODDESS sing what woe the discontent
Of Thetis’ son brought to the Greeks; what souls
Of heroes down to Erebus it sent,
Leaving their bodies unto dogs and fowls;
Whilst the two princes of the army strove,
King Agamemnon and Achilles stout.
That so it should be was the will of Jove,
But who was he that made them first fall out?

So…. which is best? Do you have a favorite?