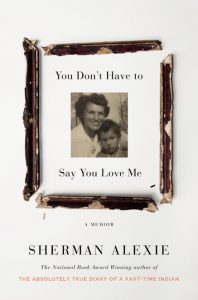 That’s Sherman Alexie, beloved author of many books, including The Lone Ranger and Tonto Fistfight in Heaven (basis for the popular 1998 movie Smoke Signals), Blasphemy, and most recently You Don’t Have to Say You Love Me, writing on Facebook last Thursday.

The occasion? Alexie was cancelling of his current book tour in order to address his looming depression, which was being amplified by his making the publicity rounds.

“I have been rebreaking my heart night after night. I have, to use recovery vocabulary, been retraumatizing myself.”

Alexie will conclude his foreshortened tour in California with tonight’s event at Los Angeles’s Aratani Theatre and dates in San Francisco and Menlo Park. Following that, with few exceptions, he’ll be taking a year off to address his “complicated grief” and continue writing.

The best thing for you to do now would be to read the author’s open letter in full because it is, as one Facebook user commented, “the most poetic cancelling of a book tour in history.” I couldn’t possibly disagree. Here’s a nice chunk:

On three consecutive nights, in three different cities, police and ambulance sirens rang out as I told the story about the moment I learned of my mother’s death.

In another city, in a hotel whose decor can best be described as Bram Stroker’s Ikea, I stepped out of the elevator to see a handmade quilt hanging on the wall. Why was such a quaint piece of Americana being displayed in such a trendy hotel?

“Hello, Mom,” I said to that quilt each time I walked by it.

Last night, as I returned to Seattle, I stepped off my plane to see an airport valet waiting with a wheelchair for one of my fellow passengers. That valet held a sign with a familiar name — a name that made me laugh. That valet was waiting to ferry somebody named Lillian.

And then, not much later, he dreamed:

But then, in the fifteenth or twentieth hotel room of this summer, I dreamed.

In the movie, the collapsed Victor Joseph reaches toward a vision of his dead father. But it is a hallucination. Victor is actually reaching toward a highway construction worker.

In my dream, I am the one fallen to the road. And I reach toward a vision of my dead mother. But she is also the highway construction worker. And she is holding a sign that says STOP.

I think the meaning of that dream is obvious.

It means I am supposed to stop this book tour.

All of our love, Sherman.