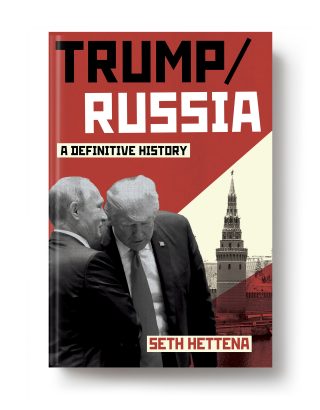 Welcome, friends, to the working week. Here’s hoping you’ve gotten some rest. The coming days are going to be live.

For us, the past few days have definitely been live, thanks in no small part to last week’s release of Trump / Russia: A Definitive History, in which award-winning AP reporter Seth Hettena offers the first—and, to date, only—complete narrative of Donald Trump’s ties to Russian money, beginning in the 1980s.

For one thing, we’ve been awfully busy sending out free e-book bundles to folks who bought the print edition, and we’d really like to send one out to you, too. Keep those proof-of-purchases comin’, folks. Proofs-of-purchase? Prooves? Whatever. Email us your Trump / Russia receipt, and we’ll send you free e-books. Through tomorrow. Yes.

And then, there’s been Seth’s media schedule to keep pace with. Here’s just a few of the hits:

Some week, right?! And those are just a few of the highlights. Seth was also on CNN with Don Lemon, back on MSNBC Saturday with Alex Witt, and a whole lot more. Where there’s pavement to be pounded and rubles to be traced, Seth Hettena will be there, laying it out with elegant clarity.

And we’ll be there too, hanging on his every damn word.