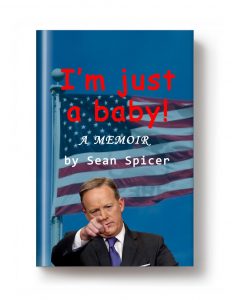 Spicer is, as we’ve written many times, a monster. Even now, in a stage of advanced attempted cuteness, he should be invariably regarded as a villain — one who denied the Holocaust from the White House, demanded obsequiousness from American-born critics of non-indigenous ancestry (a group Spicer himself falls gummily into), lied his face off, was a shit about the question of where he’s from, hyped the fascist presidency he was paid to defend in the style of a Dwayne “The Rock’ Johnson movie, and so on.

And, well, it seems that many of us are remembering that. We’ve written now several times about the book Spicer is publishing with (who else?) Regnery, The Briefing. That book is out today. Barf.

Back in May, we also covered bookseller and author Josh Cook’s work to organize a suitable response to BookExpo’s decision to host a major promotional event for Spicer. And more recently, we panted a little at the window as we imagined the really cool and fun party Spicer will be throwing in DC tonight to launch the book.

And then there’s tomorrow, when Spicey heads up to New York City, where he is not well-liked, for a promotional appearance at the Union Square Barnes and Noble. B&N has been paying to promote the event—open to anyone who plunks down $28.99 for a copy of the thing—on Facebook, and it’s… not going well. Indeed, a cursory look at the post’s 500-plus comments suggests that all of them are howlingly negative. A few delightful samples: 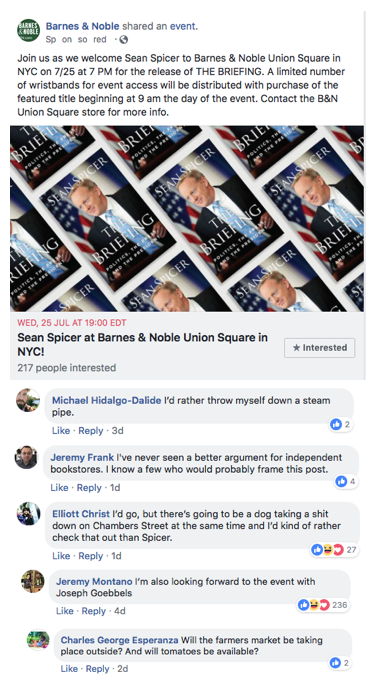 If you have a minute, it’s worth logging in to see all the comments. They’re pretty funny.

And Sean — go home and think about what you’ve done.

Andy McNab, who you may have heard of, has taken an advisory role at Biteback Publishing