Right-wing thinker is getting recognized more and more, I notice 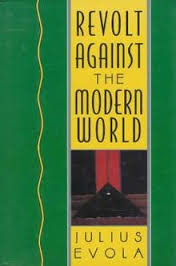 Looking for an in to the crummiest reading group of all time? Name dropping Julius Evola just may earn you that seat at the intellectual kids’ table with Milo Yiannopoulos, Richard Spencer, and Steve Bannon. In addition to other vile bonds, the three gentlemen of letters share an admiration for Evola, an Italian philosopher who has been the darling of many modern fascist movements.

For those of us who must have overlooked the Nazi-positive Evola, Jason Horowitz catches us up in a piece for the New York Times:

Evola, who died in 1974, wrote on everything from Eastern religions to the metaphysics of sex to alchemy. But he is best known as a leading proponent of Traditionalism, a worldview popular in far-right and alternative religious circles that believes progress and equality are poisonous illusions.
Evola became a darling of Italian Fascists, and Italy’s post-Fascist terrorists of the 1960s and 1970s looked to him as a spiritual and intellectual godfather.

They called themselves Children of the Sun after Evola’s vision of a bourgeoisie-smashing new order that he called the Solar Civilization. Today, the Greek neo-Nazi party Golden Dawn includes his works on its suggested reading list, and the leader of Jobbik, the Hungarian nationalist party, admires Evola and wrote an introduction to his works.

We’ve covered the sometimes boring and sometimes unhinged reading habits of Steve Bannon, but perhaps it’s his interest in Evola’s work that is most telling. Evola, after all, sought to round out boring old biological racism with a sort of mytho-spiritual dimension to bolster the white supremacist cause. The philosopher’s ideas about a pre-Christian utopia composed of white Children of the Sun are essentially the metaphysical equivalent of making America great again — a beautiful bedtime story for hateful white men.
Even Vladimir Putin’s brand of nationalism can be traced back to Evola, through the Evola-tinged influence of “Aleksandr Dugin, the ultranationalist Russian Traditionalist and anti-liberal writer sometimes called ‘Putin’s Rasputin,’” Horowitz writes.

So if that’s the progress-averse book club you’d like to be a part of, by all means head on over to Amazon and order a copy of Evola’s Revolt Against the Modern World. For the rest of us, let’s get talking about What We Do Now.