Hail to the chief, he’s the one we all say hail to. Photo by Paul D. Williams.

By now, unless you’ve already sealed the reinforced doors of your subterranean shelter, you know that President Donald Trump summarily fired FBI Director James Comey on Tuesday. It was a move that provided unneeded answers to several unburning questions: What would it take to rally Democrats, lefties, and Edward Snowden to James Comey’s defense? Is Trump exceptionally skilled at thinking through complex political eventualities? And how long must one wait before licking the peanut butter off a mousetrap?

Add to these one more: what would Richard Nixon say?

On Tuesday night, as many were comparing Comey’s baffling ouster to the Saturday Night Massacre—Nixon’s October 23, 1973 firing of special prosecutor Archibald Cox, whose Watergate investigation was then really heating up—the Richard Nixon Presidential Library and Museum, an actual institution that unironically exists, tweeted this: 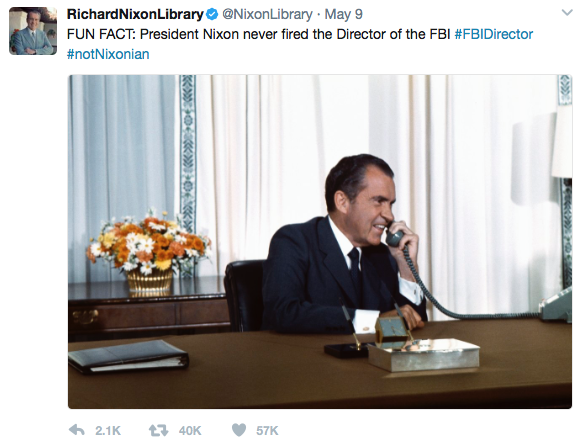 Writing in the New York Times, Matt Stevens called the library’s distinction “snide” — which, I mean, fair enough, though Nixon, for all his freaky repugnancy, had at least a kind of mystery. At any rate, the tweet, perfectly suited to the aerodynamics of our unpleasant moment, caught a tailwind quickly, receiving tens of thousands of retweets.

But the Nixon Library—whose grounds include both that president’s birthplace and his grave—is administered by the National Archives and Records Administration, and they were not amused. In a statement circulated by New Yorker deputy news editor Eric Lach, NARA clarified that “as a Federal government agency, the National Archives does not condone or engage in partisan or political conversations,” adding that the #NotNixonian tweet “was not representative of the policies of Library” and that the agency would be “examining the training provided to employees who post to official social media channels.”

We’ve written in the past about the challenges Trump poses to librarians, and the commendable ways some have found to resist him. (Archivists, too, are facing difficulties and devising solutions.) The unduly burdened officials of the National Archives are probably just doing their jobs, as they stare in continued disbelief at the hand that’s now feeding them. And hey, there’s Richard Fucking Nixon, actually looking good for a second.

But don’t worry — Trump was working to close the gap by Wednesday afternoon.