This is his thoughtful face. Also his flatulent face. One can’t tell the difference until it’s too late.

Good news, everybody! We can stop thinking now. Time to let our brains congeal into their salty custard-with-the-skin-on-it resting states. Dust off your drool bib, because at long last the most important thinker of the year has been chosen. The rest of us can all take a well-deserved break.

In a poll taken by Prospect Magazine, Richard Dawkins was the number one “world thinker” of the year, confirming the classic dictum “the wheel that squeaks one incessant, jejune, totalitarian note over and over again gets the grease.”

Below Dawkins in the Prospect poll is an interesting enough list. It includes physicists, diplomats, and even a few novelists. It reflects a powerfully Eurocentric world-view; even the “thinkers” whose work is focused on Afghanistan or Egypt are those whose methods and goals conform to cautious neoliberal western standards of politics. This doesn’t discredit the list: it is, after all, a popular poll taken of readers of a magazine. A list like that can’t be discredited. Its only role is as a mirror held up to the poll-takers’ readership. It’s to that readership’s credit that the list is as eclectic as it is. As I say, it’s interesting, and at least it’s not the Time 100.

But that brings us perilously close to thinking about who may be on the list. And that’s no longer our job, now that Dawkins, the #1 thinker in the world, is on the case. I hope he got a nice plaque.

Dawkins is tops the list because he has a vociferous following who overlap heavily with the Prospect readership. But he’s gained that loud, broad following by drastic oversimplification, by tireless willingness to harangue, by pulling the classic conservative trick—to gather support by playing at being the beleaguered righteous minority. In their citation for why Dawkins was chosen, the magazine’s editors—who themselves seem dubious of his placement—cited his popularity on Twitter. 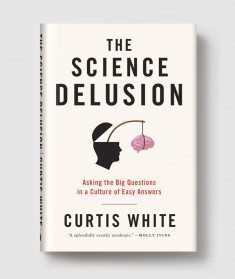 The blind spots of Dawkins and his cohort are covered in greater detail by a surer hand than mine in a book Melville House will be publishing this summer—The Science Delusion: Asking the Big Questions in a Culture of Easy Answers by Curtis White.

Perhaps you’ll get around to reading it, perhaps not. Reading does tend to require all that burdensome thought. But don’t worry if you get distracted by a frenetic commercial or a shiny object. After all, our #1 World Thinker already knows what he thinks about Dawkins, and that’s good enough for me.