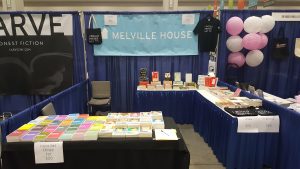 Imprimis: I am a man who, from his youth upwards, has loved writers. I’m more than happy to give writers the magisterial treatment — their hollow frames laboring over an oaken desk so that I can enjoy perfected fragments of their creative toil. But, having just returned from my first-ever AWP (Association of Writers & Writing Programs), conference, I’m glad to report that writers are people. You know, human people. They come outside and mingle with the rest of us. They come to conferences to refine their craft and build their businesses. And—expectedly—they imbibe of the sweet spirits.

Held in Washington, DC, the conference also offered surprises — and some of them came politically charged. Several protests broke out in the convention center, as Publisher’s Weekly’s Claire Kirch reports. And marches were organized to Capitol Hill and the White House.

The marchers walked through Penn Quarter and down Constitution Avenue carrying signs and chanting. When the crowd arrived at a park that separates the Capitol Building from the buildings housing the legislators’ offices, [poet D.A.] Powell told the crowd, “This is a time when we need to be visible and make our voices heard with our legislators.”

The board and staff of AWP were also getting politically involved. They had recently issued a statement opposing the travel ban, highlighting the fact that translator Siavash Saadlou had had to cancel his conference because of it. On the floor and in conversation with writers, professors, booksellers, and publishers, the feeling of solidarity and outrage was near universal. Bestselling author Celeste Ng went booth to booth handing out postcards to send politicians, and a number of booths put up signs that said, “Resist.”

Yet the convention was also a time of warmth and book-love. Sarah Gerard, author Binary Star, was giving temporary tattoos to show off her new essay collection (my tattoo of a jellyfish refuses to wash off). Johnny Temple of Akashic Books stopped by with some love from Brooklyn. Melville House authors Jeremy Bushnell, Rachel Cantor, Chris Boucher, Martin Seay, and Catie Disabato were great to run into.

But my weekend was mostly spent selling books and merch to word-thirsty writers. Of all the Melville materials on hand, Bartleby and his memorable rejoinder (“I would prefer not to”) inspired plenty of guffaws. My favorite was the mother who came by to purchase a shirt with the phrase for each of her children.

Perhaps it’s those pesky children keeping the memory of Bartleby alive. Perhaps it’s the writers who still look to Melville for inspiration. Melville House’s publisher Dennis Johnson did a panel on the novella that packed the room. And afterwards, numerous people came by to ask if novellas were still alive and well. All I needed to do was gesticulate at the table in front of me, filled with our Art of the Novella books to answer.

As long as there are people striving to say something, the art of writing will flourish in all forms. AWP reminded me of that. And the community seems stronger than ever.

On literary citizenship and giving back to the literary community